The mother of all tech demos becomes an avant garde opera 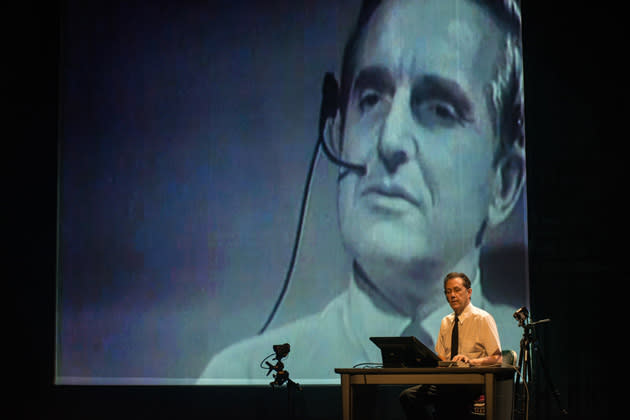 1968 is when it all changed. On December 9 that year, Douglas Engelbart, a computer scientist at Stanford Research Center, made a 90-minute video presentation that revolutionized the world of computers. He didn't show up on stage at the Computer Conference in San Francisco, instead, he teleconferenced from his research lab 30 miles away -- an unprecedented feat at the time. Now almost half a century later, "the mother of all demos" is being resurrected as an avant garde opera called The Demo. Composers Mikel Rouse and Ben Neill re-imagine Engelbart's demo and the defining moments in his life that led up to it through a hybrid theater performance.

While many people don't know about the historic event, the comfort of everyday connectivity can be traced to it. It's the day the computer mouse made its debut, along with hypertext, graphics, computer networking and videoconferencing. The opera juxtaposes the demo with new audio and video technologies –- it includes a mix of re-enactments, electronic music, live vocal and computerized voice processing. Rouse, an eminent composer, samples the original video throughout the performance but also repurposes its typed text as libretto for the vocals. He plays Engelbart in the opera, while Neill portrays his assistant, William English.

The Demo pays homage to the pioneer, but it also touches on his frustrations with the current state of technology. While most computer scientists continue to focus on advanced computers or artificial intelligence, Engelbart's work was focused on building tools that would augment human intellect. The performance will take place at Stanford's Bing Concert Hall this week, in close proximity to the spot where it all began with Engelbart and his team.

In this article: AvantGarde, computers, ComputerScience, Demo, opera, Stanford
All products recommended by Engadget are selected by our editorial team, independent of our parent company. Some of our stories include affiliate links. If you buy something through one of these links, we may earn an affiliate commission.