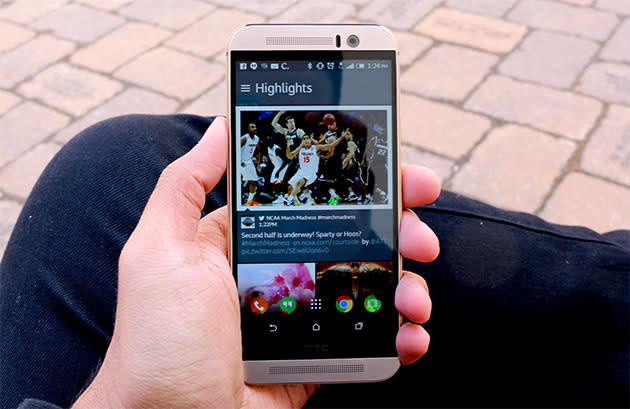 Chances are you haven't even gotten your HTC One M9 yet, but that doesn't mean you can't get a feel for its new bits. HTC just updated its Blinkfeed app with some of the thoughtful software tricks that shipped on its brand new flagship, and gave it a new name for good measure. Say hello to HTC Sense Home.

In case you haven't read our One M9 review, here are the broad strokes -- upon installation you'll get an eyeful of the Sense Home widget, which tries to learn what apps you use when you're at home, at work or just out. It's a little slow to pick up on your habits, but it'll still attempt display them when the time is right. There's a new app suggestion folder in the mix too and it offered up some really terrible new apps to download (think foreign Seamless clones) during my review period; thankfully, it's gotten a little better since then. Swiping to the right reveals our old friend BlinkFeed, which still arranges news stories and social updates (now including Tumblr!) into a grid for your perusal when painfully bored. And the pièce de résistance? You can download, create and customize your Themes to give your aging phone some personal flair.

If you're itching to complete the experience, you can install the updated HTC Lock Screen app too -- it'll surface calendar events and proffer the occasional meal recommendation, though how good those suggestions are is another question entirely. These app'll only run on HTC hardware (its Play Store listing touts compatibility with the M8 and AT&T's Desire Eye, but not the old Sprint M7 I have laying around), and they just might tame your gadget lust until you can get an M9 of your very own.

In this article: android, htc, htcone, htconem9, htcsense, m7, m8, m9, mobilepostcross, one, onem8, sensehome
All products recommended by Engadget are selected by our editorial team, independent of our parent company. Some of our stories include affiliate links. If you buy something through one of these links, we may earn an affiliate commission.