'Forza' wants to put you in 'Fast & Furious' for free 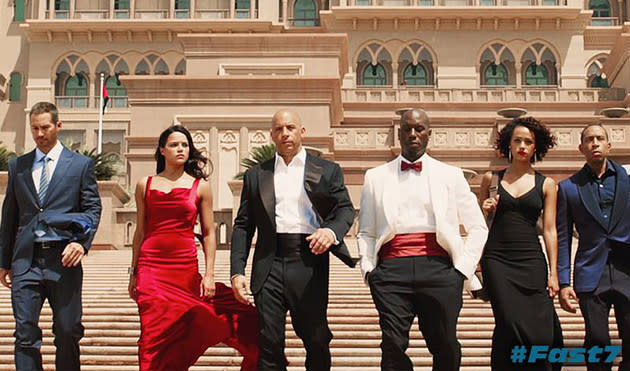 The new IMAX laser projection technology has finally arrived in the US, a few months after it was first installed in a Toronto theatre back in December. Its debut movie? Furious 7, of course. If you want to see super-sharp car chases and every detail of the The Rock's muscles, though, you'll have to make your way to the TCL Chinese Theatre in Los Angeles. It's the only cinema in the US where you can experience the technology, at least until IMAX installs it in other locations. Similar to budding IMAX competitor Dolby Cinema, this new laser projection system promises sharper, brighter images with more contrast. You'll notice it most when you look at Michelle Rodriguez's dark hair and eyes, black cars and tires, according to The Associated Press.

That's made possible by two laser projectors and proprietary tech installed in theatres, along with an upgraded sound system. This technology is reserved for locations with screens bigger than 75 feet, because it was designed to take advantage of huge displays up to 140 feet wide. Movies can now occupy up to 96 feet of the Chinese Theatre's screen, for instance, whereas they were limited to 86 feet of its width using older IMAX tech. If you're SO over the Fast and Furious franchise by now, you can also wait for Avengers 2: Age of Ultron or Tomorrowland to see how much better the new technology is compared to its predecessor.

In this article: Furious7, hdpostcross, IMAX, movies, theatre
All products recommended by Engadget are selected by our editorial team, independent of our parent company. Some of our stories include affiliate links. If you buy something through one of these links, we may earn an affiliate commission.