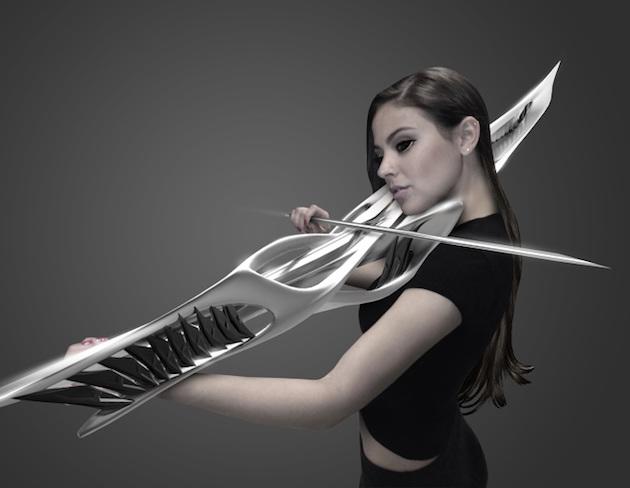 It might not be a Stradivarius, but the violin you see above is pretty impressive on its own merits. For starters, it's 3D printed and only has two strings. And that's to say nothing of its appearance; this thing looks like it'd be right at home on The Citadel in Mass Effect. The Piezoelectric Violin (as it's officially called), was concepted by a pair of architects who tell BBC that the impetus for its creation was realizing that the challenges of their day jobs aren't all that different from those faced by composers and musicians. It's still playable by "anyone" too, despite its wild looks. One of its designers tells BBC that the difference between how it and a traditional violin sounds is akin to that of a classical guitar versus an electric Gibson Les Paul. That is, similar, but still pretty different.

Interested in checking it out? You can do just that at the Inside 3D Printing conference inside Manhattan's Javits Center on April 16th and 17th. In addition to the violin, you can peep design firm MONAD Studio's take on other instruments like a cello, monobarasitar and small-and-large didgeridoo. Perhaps even better, a rotating cast of performers'll play the instruments throughout the conference as well.

In this article: 3dPrinting, av, culture, design, entertainment, gear, instrument, Javits, monadstudio, music, NewYork, piezoelectric, piezoelectricviolin, timeline163dprintbig, violin
All products recommended by Engadget are selected by our editorial team, independent of our parent company. Some of our stories include affiliate links. If you buy something through one of these links, we may earn an affiliate commission.