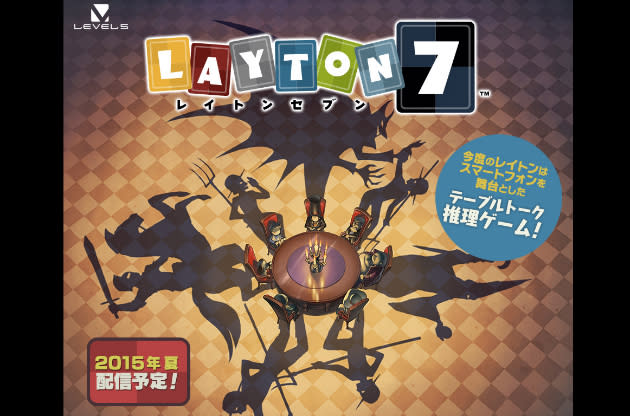 New games in two acclaimed 3DS franchises, Professor Layton and Fantasy Life, are heading exclusively to iOS and Android. During an event today, Japanese developer Level-5 announced it will bring Professor Layton and Fantasy Life to smartphones and tablets in Japan only (for now). Siliconera reports the next Professor Layton game is called Layton 7 and it seems to be a departure from the series' puzzle-solving roots, offering a card game with fortune-telling aspects where players attempt to figure out who the "Vampire" is. The new Fantasy Life game, Fantasy Life 2: Two Moons and the Village of God, sticks closely to the franchise's role-playing script but offers more city-building options, Siliconera says.

Layton 7 and Fantasy Life 2 are due out for iOS and Android devices in Japan in the summer. Level-5 revealed Layton 7 in 2013 and at the time it said the game would come to 3DS as well as mobile devices, though Nintendo's handheld was absent from today's announcements. Nintendo is a new passenger on the smartphone and tablet train: In March it announced an initiative to create original games for mobile devices as part of a partnership with handheld platform developer DeNA.

Level-5 also revealed today that Yo-Kai Watch, a creature-collecting game for 3DS that's extremely popular in Japan, is heading to North America, Europe, Latin America, Korea, New Zealand and Australia. Nintendo is publishing the series, and Hasbro will manufacture toys related to the game. Siliconera reports that Yo-Kai Watch is due out in North America in 2016.

YO-KAI WATCH, the charming RPG that is an absolute sensation in Japan, is coming to the U.S. on #3DS! pic.twitter.com/F9Whr5LOOM

In this article: android, fantasylife, FantasyLife2, hdpostcross, IOS, Layton7, Level-5, nintendo, ProfessorLayton, smartphone, tablet, yokaiwatch
All products recommended by Engadget are selected by our editorial team, independent of our parent company. Some of our stories include affiliate links. If you buy something through one of these links, we may earn an affiliate commission.