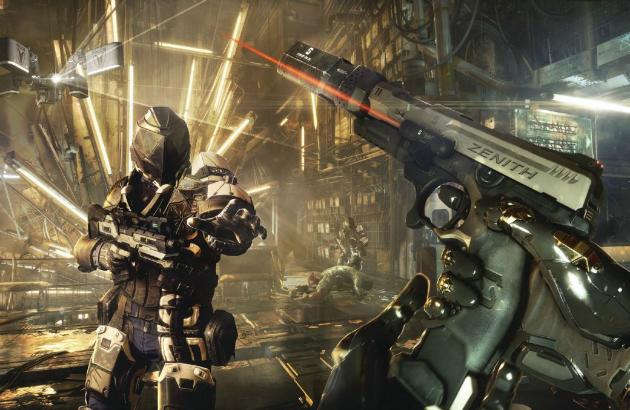 Pre-orders for Deus Ex: Mankind Divided are live today via the game's official site, open to pure humans and transhumans alike. (The site is down at the moment, but it should be "back soon"). Mankind Divided is in development for PS4, Xbox One and PC, and it doesn't have an official release date. Yes, you can pre-order a game that was revealed, without many details, just minutes ago and that doesn't yet have a release date. Welcome to the future.

Mankind Divided is the follow-up to Deus Ex: Human Revolution and it's set two years after that game, in 2029, when people with technologically augmented bodies are at war with unaltered humans. Details about the game leaked yesterday, right in the middle of Square Enix and Eidos Montreal's days-long teaser campaign featuring a Twitch stream of a man locked in a futuristic-looking cell. He spoke of transhumans forced to live in ghettoes and he vowed to fight for freedom. "We are stronger, faster, smarter," the man read to the camera. "We have transcended our fears and because of this you have declared war. And so we will fight for the respect we deserve."

Mankind Divided will have a heavy focus on player choice, and this idea was integrated into the Twitch teaser: At one point, viewers decided if the man should "resist" or "collaborate" with his captors by typing their choices into the chat (they chose "resist"). Square Enix officially revealed Mankind Divided with a pretty, action-packed, CG trailer, which you can view below.

In this article: Deus-Ex, DeusEx, DeusExMankindDivided, hdpostcross, pc, preorder, ps4, SquareEnix, STEAM, XboxOne
All products recommended by Engadget are selected by our editorial team, independent of our parent company. Some of our stories include affiliate links. If you buy something through one of these links, we may earn an affiliate commission.