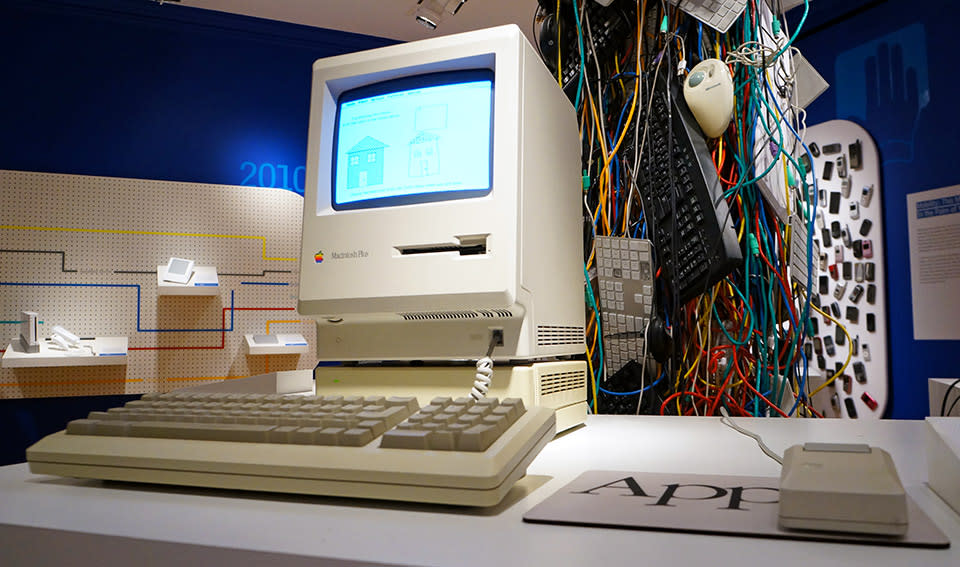 It isn't the most comprehensive display, but it provides the necessary landmarks that define the journey of computers from laboratories to personal living spaces. The evolution, spread over the last four decades, starts with the 1982 Commodore 64 (the best-selling standalone computer of all time) and ends with the 2010 Microsoft Kinect. Keramidas, and his team of students, scouted machines on eBay for two years. They spent about $6,200 on rare computers and mobile phones. "It was interesting to see what stuff people like to save, how they sell it, how they tell a story of how great it is," says Keramidas. "They use nostalgia as a tool." The idea was to find machines that were ubiquitous during their lifespans. Out of the 25 items on display, five core machines circle the center of the room. "They each represent a historical development of interface experience," he says.

Jonathan Dahan, a Brooklyn-based software designer, programed the core computers so visitors can play around with the obsolete designs. You can press the chunky keys of a Commodore 64 keyboard or drag a first generation, curve-less Macintosh mouse. You can poke the PalmPilot with its stylus, swipe an iPad2 or wave your hands in front of the Kinect to activate its sensors. The inconvenience of interacting with older, heftier machines puts the power and complexity of present day technology in perspective. The differences are also a great reminder of where it all began for personal computers.

40
In this article: Commodore64, computers, ipad, kinect, macintosh, software, vintagecomputers
All products recommended by Engadget are selected by our editorial team, independent of our parent company. Some of our stories include affiliate links. If you buy something through one of these links, we may earn an affiliate commission.