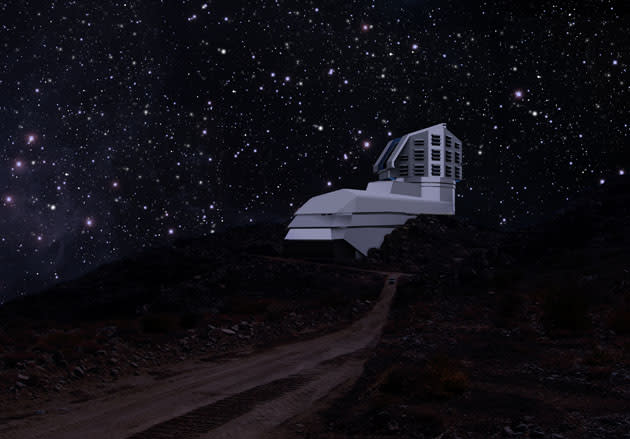 That 3D rendering up there is a new telescope from the National Science Foundation that promises to solve the mysteries of the universe -- or at least take some truly big pictures. Fitted with a 3,200 megapixel camera, the Large Synoptic Survey Telescope will be the largest digital camera in the world. Once operational, it will scan the entire night sky a few times a week for ten years and is expected to provide scientists unprecedented access to previously inscrutable parts of the cosmos. The camera will literally shed light on dark energy that is believed to accelerate the expansion of the universe, but has long evaded definitive probes. Apart from capturing images of exploding supernovae at an unfathomable distance, it can detect and track asteroids in our planet's vicinity.

Measuring 8.4-meters (27.56 ft) wide, this telescope is the result of a partnership between American and Chilean government agencies and private donations. It's located at Cerro Pachón, a mountain peak in northern Chile that is ideal for universe watching thanks to its clear air and lack of light pollution. Construction officially starts next week with a Chilean stone-laying ceremony, but it won't see light until 2019. When it's fully operational in 2022, it will monitor billions of objects, rare celestial events and rapid movements of particles across the sky. The best news is that access isn't limited to astrophysicists -- even casual backyard astronomers will be able to pore over the roughly 30 terabytes of data the telescope is expected to produce every night.

In this article: asteroids, Chile, high-resolution, LSST, nsf, scientists, space, telescope, universe, video
All products recommended by Engadget are selected by our editorial team, independent of our parent company. Some of our stories include affiliate links. If you buy something through one of these links, we may earn an affiliate commission.