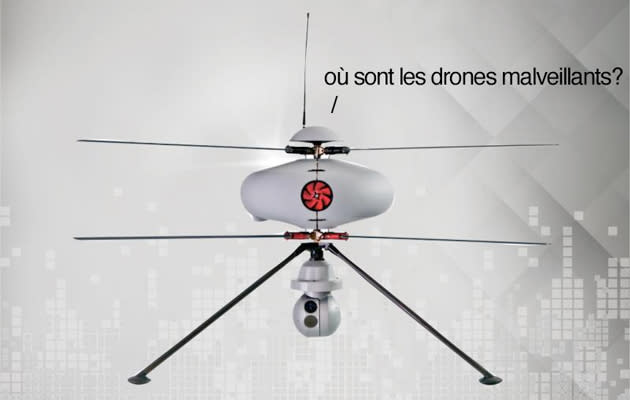 Paris has been hit with a spate of anonymously-piloted drones flying over key landmarks, government buildings and even a nuclear power station. It's not been clear if it's a group of amateurs with bad timing or something more coordinated, which has spooked the locals and law enforcement alike. Thankfully, French firm ECA has been quick to respond to the potential threat, building an anti-drone drone that can hunt down drones and identify their pilots.

Once a rogue drone has been spotted in the skies, the customized EC180 will chase it down and triangulate the position of its pilot. The craft will then find the shadowy human, take their mugshot and alert nearby police as to their location in the hope of catching them in the act. Unfortunately, and for perfectly understandable reasons, ECA won't expand on how its gear can achieve this feat of airborne counter-espionage.

The company's certainly piling on the hype, saying that its new technology "makes it impossible for malicious operators to disappear." Apparently, it's also been tested twice by French authorities who were "fully satisfied" that the unit could find and locate pilots within a radius of 700 meters in less than a minute.

In this article: Drone, Drones, ECA, France, Paris, Security, Terrorism
All products recommended by Engadget are selected by our editorial team, independent of our parent company. Some of our stories include affiliate links. If you buy something through one of these links, we may earn an affiliate commission.