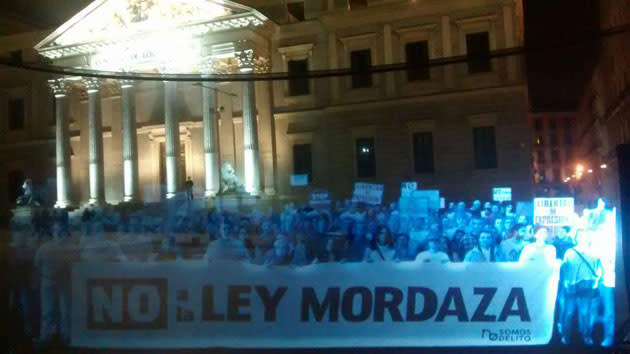 Spain's imminent Citizen Safety Law isn't exactly protester-friendly -- you can face stiff fines just for daring to disobey police peacefully, let alone holding a protest without telling the government. The activists of Hologramas por la Libertad have found a clever workaround for that, however. As the name suggests, they're using holographic protesters to challenge the new legal restrictions. People worldwide were invited to record video (or text and voice, if they preferred) that would be converted into holograms marching in front of the Spanish Parliament. If you aren't allowed to protest in person, the movement argues, you can still protest as an optical illusion.

The results you see here aren't quite as intimidating as sea of real people, and they have to be shown at night to get the effect. Unfortunately, that means that the politicians who most need to see the protests probably won't notice them until after the fact, if at all. Still, it's proof that holograms can help the public get its message out, not just politicians and celebrities.

In this article: citizensafetylaw, display, hologram, holographic, politics, protest, spain, video
All products recommended by Engadget are selected by our editorial team, independent of our parent company. Some of our stories include affiliate links. If you buy something through one of these links, we may earn an affiliate commission.