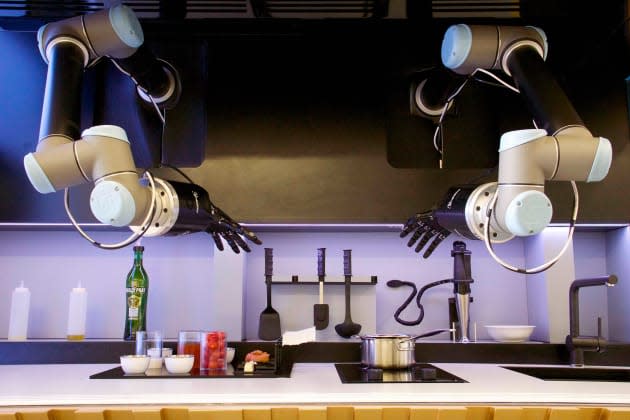 You could swap hands with the Robot Devil and still not be as good a chef as this prototype from Moley Robotics. The unit consists of two mechanical arms terminating in a pair of highly dexterous biomimetic hands. Designed by 2011 MasterChef winner Tim Anderson, and currently on display at the Hanover Messe industrial robotics show, these arms move just like he does. Namely because that's what they were programmed to do. To "teach" the unit to make crab bisque for the show, Anderson didn't spend countless hours hand coding the unit's behavior and actions. Instead, he constructed a replica kitchen, set up motion capture cameras, then made the dish himself and had his movements digitized for the robot to mimic.

"Having seen -- and tasted -- the results for myself, I am stunned," Anderson said in a statement. "This is the beginning of something really significant: a whole new opportunity for producing good food and for people to explore the world's cuisines. It's very exciting." Moley Robotics hopes to offer a residential "automated kitchen" unit within two years for around $15,000. It will include the arms as well as a purpose-built sink, oven and dishwasher so that it can clean up after itself too. Now if only they could teach it to also shake up a good martini.

In this article: masterchef, moleyrobotics, robotics, robots, ShadowRobot
All products recommended by Engadget are selected by our editorial team, independent of our parent company. Some of our stories include affiliate links. If you buy something through one of these links, we may earn an affiliate commission.