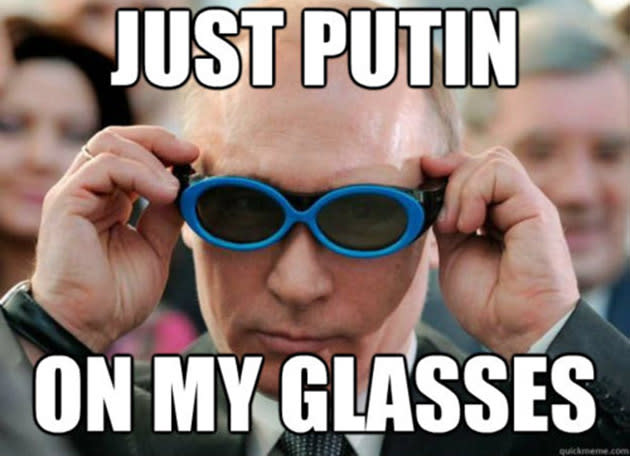 Russian meme lovers have to be extra careful who to show their masterpieces to, because the image macros can apparently get them sued. Roskomnadzor, the country's agency responsible for controlling the internet, media and telecommunications, has recently announced that it's illegal to post memes depicting public figures unrelated to their character or identity. Yes, the agency means celebrity memes, including (okay, more like especially) ones featuring Putin. According to The Washington Post, this isn't exactly a new policy: Roskomnadzor merely "updated" its personal data laws, following a lawsuit filed by Russian singer Valeri Syutkin.

Syutkin was unhappy when his face was used in a macro that featured a line from another Russian artist's song, which roughly translates to "smack the bitch in the face." After the court ruled in favor of Syutkin, Roskomnadzor made the policy update/clarification announcement on Vkontakte (think of it as the country's Facebook). By the way, in addition to banning celebrity memes, Russia has outlawed parody accounts and websites, as well.

Russia has been tightening up its internet laws for quite a while now. It started requiring bloggers to register with the government last year in an effort to get rid of anonymous blogs. That ultimately prompted Intel to shut down its Russian forums. It also wants websites to store all its citizens' data on servers physically located within the Federation, leaving Google with no choice but to shutter its engineering offices in the region.

Still, it doesn't seem like Russia plans to keep an extremely close eye on citizens' activities and throw everyone who posts image macros in jail. The person in the memes will have to report them to Roskomnadzor, before the agency can file a lawsuit. If the court rules in favor of the complainant, websites that feature his memes will have to choose between keeping them hidden from Russian eyes or having their entire URLs blocked across the country.

In this article: censorship, memes, russia
All products recommended by Engadget are selected by our editorial team, independent of our parent company. Some of our stories include affiliate links. If you buy something through one of these links, we may earn an affiliate commission.