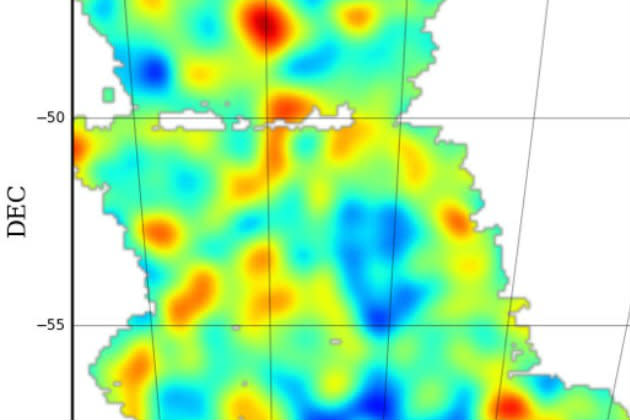 We've finally gotten our first glimpse at the mysterious material that supposedly makes up 27 percent of the universe. It's only taken two years of research, the efforts of 300 researchers working for the Dark Energy Survey (DES) and a 570-megapixel camera attached to the Victor Blanco telescope in Chile to do so. Their findings, in the form of a map, are expected to be released at a meeting of the American Physical Society tomorrow. Well, "map" is a bit of a misnomer dark energy can only be observed indirectly, through the lensing effect that it has on stars and galaxies.

"Our goal all this time has been to see the invisible -- to see dark matter," said Sarah Bridle, an astrophysics professor at the University of Manchester told the BBC. "To be able to look at a map and say, 'That part of the sky's got more dark matter in it, that bit's empty,' is the dream that we've had all this time."

Most of the past two years have been spent making sure that the system worked as planned as well as poring through reams of data generated by it. The team measured the shapes of more than 2 million galaxies in its initial survey and then calculated how much dark energy must be present between them to cause any observed distortion. Much of the analysis has revolved around mitigating the additional lensing effects caused by the Earth's atmosphere and imperfections in the survey camera itself. The researchers have only studied 0.4 percent of the night sky so far but have done so in unprecedented detail.

Researchers hope to expand their survey map to 30 times its current size over the next three years and, according to Prof. Bridle, "It's also possible, with the same data, to show that dark energy is not a good theory for explaining what's going on -- and in fact, general relativity itself is wrong."

In this article: astrophysics, darkenergy, DarkEnergySurvey, space
All products recommended by Engadget are selected by our editorial team, independent of our parent company. Some of our stories include affiliate links. If you buy something through one of these links, we may earn an affiliate commission.