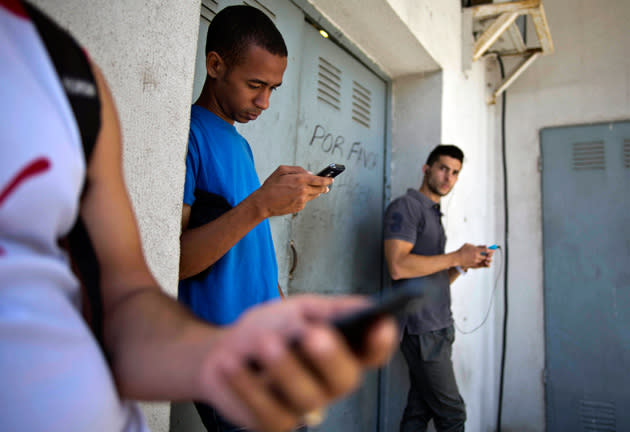 It's been less than four months since President Barack Obama renewed diplomatic ties between the US and Cuba, and the slow invasion of American companies is already underway. Netflix swooped in and started offering its catalog of streaming content for $8 USD per month to the country's financially fortunate. Then there's Airbnb -- the home-sharing startup that's apparently valued at $20 billion -- which just opened up more than a thousand of Cuba's casas particulares (private homestays) to would-be American tourists. More US tech companies will start reaching for the country now that relations have defrosted, but let's not forget the seeds needed for a homegrown Cuban tech scene have started to take root too... albeit very slowly. The one big thing holding that fledgling economy down? Infrastructure.

Striking out on their own Entrepreneurship has been on the rise for the past few years, to the point where Cuba plays host to roughly half a million self-employed. A recent survey conducted by Bendixen and Amandi on behalf of Fusion and Univision put an even finer point on Cuba's startup situation: 70 percent of the 1,200 respondents said they wanted to start their own business. Most people who apply for self-employment licenses open restaurants or run bed-and-breakfasts, but jobs like "computer programmer" are officially fair game now, too. The Huffington Post's Scott Norvell points to an interesting example in YoTeLlevo, a sort of burgeoning "Uber for Cuba." That's putting it a little enthusiastically -- there's no smartphone angle, just a web app you can use to get quotes from three local cab drivers who ferry around foreigners and offer a slice of their fares to the company doing the coordinating. The YoTeLlevo people sure talk like startup types, though, noting that their drivers will add "sparkle" to your trip and just might become your "friend" -- shades of Lyft, anyone?

Its genesis may have been unlikely, but here's a tech startup born in response to tourism to the once near-isolated country, something that'll only become easier with time. While startup life is hard enough, though, working in Cuba presents a different set of problems to tackle (edited slightly for clarity):

"The conditions for the internet access are precarious. I use an account I have from my organization to surf the web and do some things I need to do, but of course this is under the hood. Also this connection is very slow and unstable. To access the server and do updates to the app, I ask for favors to a friend of mine so I can use her account; I have to go to her house and connect from there, always in a hurry so I don't consume much of her time." There's only one undersea cable connecting Cuba to the rest of the internet as we know it, and existing satellite data connections can be questionable. In other words, internet access in Cuba is spotty, expensive and highly limited, which is pretty tragic when steady networks are downright crucial to Cuba's entrepreneurial and economic future. That could change soonish, though, thanks to an easing of licensing and export provisions laid out by Obama and the Treasury Department. In the president's words, "Businesses will be able to sell goods that enable Cubans to communicate with the United States and other countries," including "items for the establishment and update of communications-related systems."

Long story short: Cuba could be in for a major network upgrade in the months and years to come. Hell, Huawei has already confirmed that it's in talks with the Cuban government to bolster its infrastructure with commercial networking gear, though there's no final deal in place just yet. And what of the mobile end of the spectrum? Cuba's got around 2 million cellphones in people's pockets -- some network strengthening might mean great things for them too. After all, the upside to building out mobile networks in developing regions is that companies can leapfrog older network tech in favor of new, more efficient stuff.

Well, let's look at it this way: All those devices are subject to the whims and foibles of ETECSA, the country's sole telecom. Dig deep enough and you'll see quite a mix of mobiles -- many are your average, low-cost feature phones, but there's a notable number of smartphones passed along by foreign well-wishers. The catch? ETECSA's network hasn't had enough oomph to offer data packages yet. It announced plans to offer mobile data access last year at a maximum rate of one Cuban Convertible Peso (CUC) per megabyte through the wireless carrier Cubacel (remember, the average monthly wage in Cuba hovers between 12 and 20 CUC), and a report from Cubanet alleges that the company will roll out those wireless data packages to Cuba's consumers soon. We wouldn't be surprised if pricing was almost completely prohibitive, but it could help unlock the sort of mobile, app-based economy we've embraced so quickly in the US. Sounds like a step forward, right? Still, many Cubans don't really trust ETECSA to get the job done properly, and rightfully so. To wit: The country only officially began to offer mobile email access through (guess who!) ETECSA in March 2014, and only supported the state-run Nauta.cu service. Long story short: It was sort of a disaster.

The tech world is paying attention They might be the most eager to turn a profit, but Netflix and Airbnb aren't the only tech titans keeping a close eye on what's happening 90 miles off the Florida coast. Facebook founder and CEO Mark Zuckerberg just recently reaffirmed the social giant's dedication to free and easy communication at a CEO conference in Panama City, and noted that he'd definitely consider bringing Facebook to Cuba when the time is right. With any luck, that'll happen sooner rather than later -- initiatives like Facebook Zero and Internet.org could help Cubans share ideas and spark meaningful conversations, though we're not holding our breath waiting for the Castro government to jump on board.

High-ranking Google execs have visited Cuba a handful of times too, most recently in March to meet with rising computer science students on behalf of the company's Ideas thinktank. The visit underscored yet more roadblocks to the growth of a mobile economy like the one we're all too familiar with -- students wondered why they couldn't download certain (i.e., non-free) apps from the Google Play Store, and asked if they'd be able to list apps of their own creation there someday too. The answer was as uninspiring as you'd expect: It's just not "possible for the moment." Of course, the thing to remember is that moments pass. Things get better. Regimes soften and decay. What's clear is that the desire to do more, build more and be more than the Old Cuba burns brightly in some. There's room for momentous progress in Cuba, but the wait for the systems to allow it won't be an easy one.

In this article: connected, cuba, editorial, embargo, US
All products recommended by Engadget are selected by our editorial team, independent of our parent company. Some of our stories include affiliate links. If you buy something through one of these links, we may earn an affiliate commission.