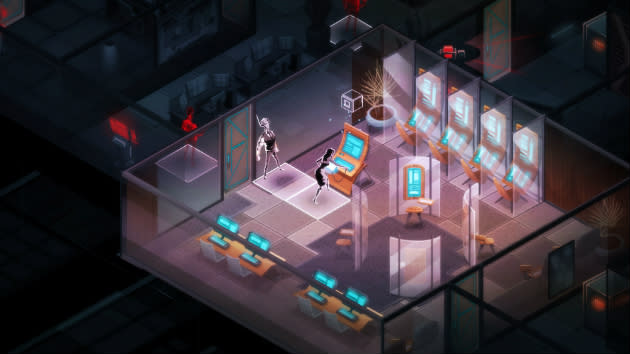 Step back in time -- to the future! Invisible, Inc. is a tactical espionage game set in a futuristic, corporate-controlled world where hacking is as cool as 1950s-style fedoras and trench coats. It launches on Steam for PC, Mac and Linux on May 12th, Klei Entertainment announced in a shiny new trailer today. Klei is the studio behind excellently quirky games like Don't Starve and Mark of the Ninja, meaning Invisible, Inc. is on track to be a superb experience. An in-progress version of the game has been available via Steam Early Access since last year, but now the full thing will be up for grabs, no bug reporting required. It's also headed to PlayStation 4, though that release date is still up in the air. Get a taste of Invisible, Inc.'s stylish, stealthy exploits in the new trailer below.

In this article: espionage, hdpostcross, Indie, invisible-inc, InvisibleInc, klei-entertainment, kleientertainment, stealth, STEAM
All products recommended by Engadget are selected by our editorial team, independent of our parent company. Some of our stories include affiliate links. If you buy something through one of these links, we may earn an affiliate commission.