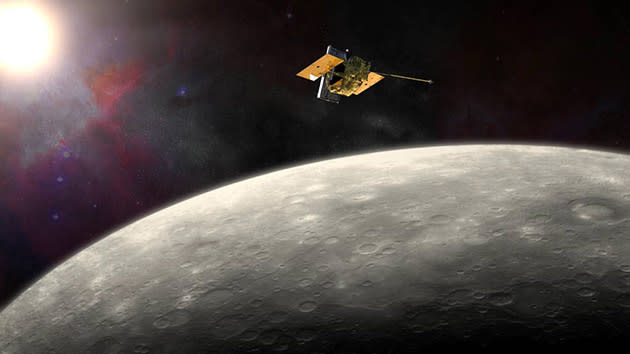 The spacecraft that captured the first photos of ice on Mercury is bidding us all farewell on April 30th. NASA's MErcury Surface, Space ENvironment, GEochemistry and Ranging (Messenger) spacecraft is almost out of propellant after spending over six-and-a-half years traveling to the planet and four orbiting and studying it. The agency sent Messenger to space aboard a Delta II rocket in 2004 in its quest to know more about the first rock from the sun. It ended up providing evidence that there's ice and organic matter hiding in the planet's craters, as well as data showing that all the ice in Mercury's polar regions would be around two miles thick if spread all over Washington.

Its scientific findings aren't Messenger's only contribution to space exploration as a whole, though. Due to Mercury's position near the sun, NASA had to develop special materials to protect the spacecraft from both heat and radiation. One of those is a ceramic cloth that regularly endured temperatures exceeding 570 degrees Fahrenheit to shield the scientific instruments on board. Scientists plan to take cues from those heat-and-radiation-resistant technologies to design equipment for future missions.

Messenger's ground team has been trying to delay the inevitable by performing orbit correction maneuvers. However, after the last maneuver is done on April 24th, it will be completely out of propellant, leaving it to crash into the planet at 8,750 miles per hour. Unfortunately, we can't witness its final moments, since it's slated to land on the planet's side facing away from Earth. So let's just silently say goodbye and thank it for all the data.

[Image credit: NASA/JHU APL/Carnegie Institution of Washington]
In this article: Mercury, messenger, NASA, space
All products recommended by Engadget are selected by our editorial team, independent of our parent company. Some of our stories include affiliate links. If you buy something through one of these links, we may earn an affiliate commission.