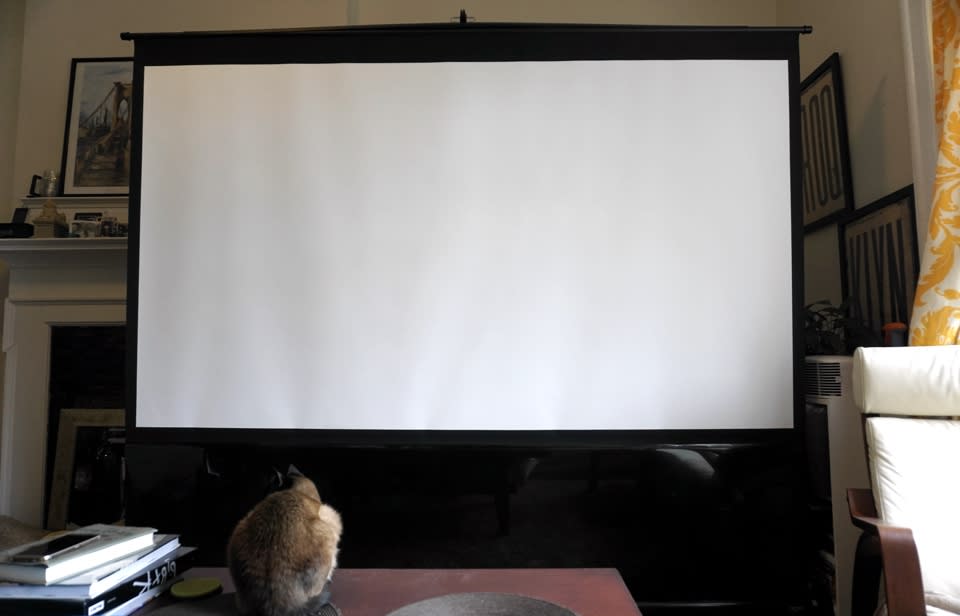 You could call me a bit of a movie fan. I own hundreds of Blu-rays and DVDs, see an obscene amount of movies in theaters and have been podcasting about my obsessive media habits for the past eight years. Movies aren't just mindless fun for me; they're a way of life, a religion. So it was only a matter of time until my 50-inch plasma HDTV started to feel too small and the siren song of an in-home projector came calling. My only problem? I live in Brooklyn. And while my apartment isn't the shoebox you'd normally associate with NYC, it's still a tough space to visualize fitting a projector and a giant screen. This is the story of how I made that happen.

Gallery: Fitting a 100-inch projector in an apartment | 9 Photos Dreaming of a giant screen

So why did I need a projector when I could have just bought a bigger HDTV? That was certainly tempting, especially now that big-screen TVs are getting cheaper every day. But the more I thought about it, I realized that I didn't want a bigger television set taking up space in my living room. I got a great deal on my 50-inch Samsung plasma HDTV back in 2009, and, aside from the lack of 3D, I don't really have a reason to get rid of it. And honestly, even a 70-inch TV wouldn't offer the cinematic scale I really want. No, I wanted a screen that fully recreates the theater experience, something that dwarfs me like the 2001 monolith.

With all of that in mind, my ideal movie-viewing setup came into focus. I realized I didn't want to completely replace my TV -- given my lack of space, that was just too unrealistic. Instead, I needed a projector experience that could be rolled out for movie and gaming nights, and stowed away the rest of the time. That meant I couldn't go with a traditional wall-mounted projector screen. I needed something portable. Your typical projector setup is made up of two things: a projector and a decent screen. After plenty of research, I ended up going with The Wirecutter's recommendation for the best projector under $1,000: the BenQ HT1075. It had all of the features I was looking for: A bright 1080p picture, accurate colors and vertical lens shifting (the ability to maneuver its lens slightly for better placement). It was also surprisingly inexpensive, at around just $800 from Amazon.

Of course, I fantasized about going straight to a 4K projector. But given their higher prices (starting around $5,000), and a dearth of 4K content, it doesn't seem worth it yet. You can bet I'm upgrading in a few years, though. You can argue about how useful 4K is on 50-inch TVs, but on a projected screen it's indisputably better.

As for the screen, my options were more limited. After an exhaustive search, I settled on Elite Screens' ezCinema series, which are reflective (the key element of a good screen), very portable (they only take a few minutes to set up and break down) and affordable at $200 to $300. "That's a bingo." I opted for the 100-inch ezCinema model -- pretty much the largest screen I could fit in my living room -- but its 80-inch screen would also be great for smaller apartments.

Before I ordered anything, I took plenty of measurements to figure out how it would all fit together in my space. The projector calculator at Projector Central was particularly handy for this. In the end, I learned I had enough clearance to display a 100-inch image, but my projector would have to be somewhere behind my couch. That squashed my plan to build a floating shelf for the projector -- I ended up just buying an inexpensive folding bookcase that fit it perfectly. For most first-timers, finding a good spot to place your projector and screen will be your biggest problems. If you've got a smaller living space, you should consider a short-throw projector, which can spit out a big image from up close.

Once I had the main components in mind, I also visualized how, exactly, it would fit into my current home theater setup. Right now I've got a Harman Kardon receiver connected to a set of Onkyo 5.1 surround sound speakers and subwoofer. Most of my A/V components plug into the HDMI ports on the receiver, so I picked up this splitter to feed the receiver's HDMI output to both my TV and the projector.

If you're eyeing a setup similar to mine, I also recommend an IR blaster so that you can change the volume on your receiver or TV when the projector screen is up (it'll likely block all of your A/V components, so IR remotes won't work). My aging Google TV Blu-ray player handles the IR blaster side of things, but I still have to get up and reach behind the screen if I ever need to change my receiver's input. The only component that gives me trouble with the projector screen is my Apple TV. I can control it wirelessly with Apple's iOS remote app, but I still prefer the convenience of its tiny remote. My fix? I just move the Apple TV to the side of my projector screen whenever I need to.

Altogether, my entire setup cost around $1,200, a bit less than what you'd pay for a high-end 60-inch HDTV (or a 50-inch 4K set). It wasn't exactly cheap, but it feels like a steal for being able to recreate a theater in my living room.

Putting it all together Unlike TVs, a projector setup isn't just a plug-and-play affair. You have to think about where the projector and screen are located, fine-tune the positioning of both and deal with a slew of other issues. Even the brightest projectors on the market can't compete with daylight, for example, so you'll need to have some blackout curtains on hand if you want to watch anything before sundown.

Once I had all my components, I first had to figure out where the projector would live. I experimented with a few different locations on my folding bookshelf before I settled on the second-highest shelf, which put the projector around four feet high. That was just enough to get it over my couch, though not high enough to compensate for someone sitting in that seat. It's not ideal, but for now, the left side of my couch is off limits when the projector is going (unless you're reclining, or very short).

It took a while for me to get used to maneuvering the portable screen -- it's around 20 pounds and very wide -- but it now feels practically second nature. Once you unlatch the (surprisingly sturdy) case, you just need to plant the expansion rod in the center and pull the screen up. Once the screen is attached to the expansion rod, a process that takes all of 30 seconds, you just need to move behind it, unlock the rod, pull the screen up to your desired height and lock the rod. I could probably be more scientific about this, but really I just pull it up as far as my arm can reach. That puts the useful area of the screen around three to six feet high, which is ideal for viewing from my couch. After several months, setting up the ezCinema display now just takes me around two minutes, and breaking it down is even faster. And when I'm not using it, I just lean it against my office wall (thankfully I've got high ceilings).

With the screen up and projector in place, it was time to iron out the wrinkles. My big issue: The projector was spitting out an image that was way too high. I couldn't move it much lower because of my couch, so my only alternative was to angle the projector down slightly with a very high-tech solution: a box under its rear. Generally, that's something you want to avoid. After I settled on the ideal projector angle, I fit the image into the screen area with the projector's manual zoom and brought everything into focus. At that point, it became clear that even with keystone correction, my image wasn't perfectly rectangular. So to fill every corner of the screen, I have to deal with a bit of spillover. Again, it's not ideal, but it's also not very noticeable when I'm in the middle of a great film.

With everything in place, I sat back on my couch, a mere six feet away from the screen, and enjoyed my first home projector experience: the teaser trailer for Star Wars: The Force Awakens. It was like experiencing HDTV for the first time after suffering through standard def my entire life. It was a revelation. I watched that trailer several times back to back, realizing I've been spoiled forever for every other home theater experience that wasn't a gigantic 100-inch screen.

That was back in December. Since then, I've rewatched the entire Matrix trilogy (and yes, the sequels are more bearable now), The Lord of the Rings trilogy, Terminator 1 and 2 and plenty of classic films. Through the sheer size of the screen, I've noticed countless details in films I'd already seen dozens of times. It's also rekindled my love for animation -- it's hard not to appreciate hand-drawn art when seeing Akira, Princess Mononoke and The Legend of Korra blown up. And, as you can imagine, gaming on a 100-inch screen is life-changing. Playing through Dragon Age Inquisition, Forza Horizon and Bloodborne felt all the more immersive. I didn't have any issues with latency, or lag time between your controller inputs and what you see on the screen, although that's something hardcore FPS players should watch out for. It's also difficult for your brain to process such a giant image, so if you play a lot of Call of Duty, your reaction times may end up being a little slower. I found that slower-paced shooters like Destiny were better suited to projector play.

There are, of course, downsides to watching anything on such a large screen. Artifacts from low-quality streams, badly mastered Blu-rays and DVDs and crummy game engines become more apparent. It's also tough to watch many sitcoms on a big display, because their lighting and cinematography often looks low-rent.

My big takeaway from this whole projector adventure? I'm not sure how I lived without it. It's the single most significant home theater upgrade I've made in my lifetime of movie viewing -- even more so than getting my 50-inch plasma HDTV five years ago, or building up a legitimate surround sound system with grown-up speakers (not just a home theater in a box).

I still enjoy going to the theater -- even the crowded and noisy NYC variety -- because there's something truly special about the communal experience of film. But being able to worship at the altar of cinema in my living room is simply priceless.

In this article: engadgetIRL, hdpostcross, projectors, video
All products recommended by Engadget are selected by our editorial team, independent of our parent company. Some of our stories include affiliate links. If you buy something through one of these links, we may earn an affiliate commission.