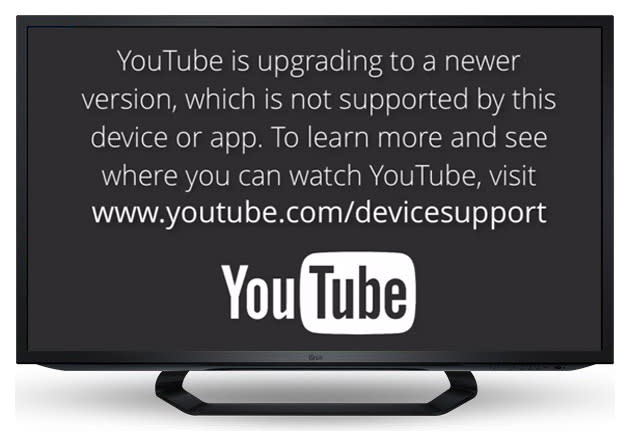 Now, if you want continued access to the YouTube app, you'll have to update iPhones, iPads and iPods to iOS 7, at least. Third-gen Apple TVs need a platform upgrade, as well, while Google TV version 3 or 4 devices need the latest app update available on Google Play. Just because your product is too old for upgrades doesn't mean you'll have to bid your YouTube binges farewell, though. The website still loads on Safari (even on older iOS devices) or on any smart TV browser than supports flash/HTML5.

In this article: app, apple, AppleTv, google, Ios7, mobilepostcross, samsung, SamsungSmartTv, SmartTv, update, youtube
All products recommended by Engadget are selected by our editorial team, independent of our parent company. Some of our stories include affiliate links. If you buy something through one of these links, we may earn an affiliate commission.