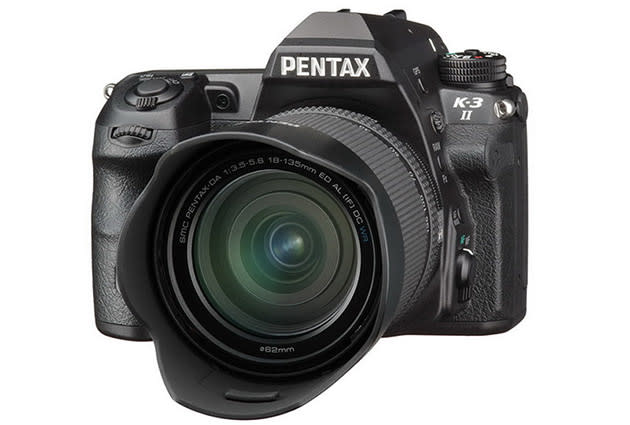 Given the moribund DSLR market, Ricoh wasn't about to mess around with the follow-up to its popular Pentax flagship, the K-3. Sure enough, the K-3 II retains the weather-proof body, fast 8.3 fps shooting speed and high-quality 24.4-megapixel APS-C-sized sensor of the last model, while getting some enticing new tweaks. First and foremost is the so-called Pixel Shift feature which uses in-body shake reduction to sample pixels four times, significantly reducing noise at low-light levels. While the feature only works for static subjects, it should be ideal for astrophotography and other applications. The revised in-camera shake reduction also improves stabilization to 4.3 stops. The K3-II has a new, built-in GPS receiver that can record shooting location, camera orientation and other features. Together with acceleration sensors and the in-body stabilization, it can sync the CMOS sensor to the movement of celestial bodies with its "Astrotracer" function, another boon for star shooters. Unfortunately, the GPS mechanism replaces the built-in pop-up flash, which may disappoint casual users. Other new features on the K-3 II include new algorithms for its 27-point autofocus system and automatic horizon correction, but, WiFi still isn't built-in and has to be done through a FLU card. The price is perhaps the best feature of all: at $1,099, it's $200 less than the last model and $700 cheaper than Canon's 7D Mark II, for instance. It'll arrive in the US next month.

In this article: DSLR, K-3 II, noise reduction, Pentax, pixel shift
All products recommended by Engadget are selected by our editorial team, independent of our parent company. Some of our stories include affiliate links. If you buy something through one of these links, we may earn an affiliate commission.