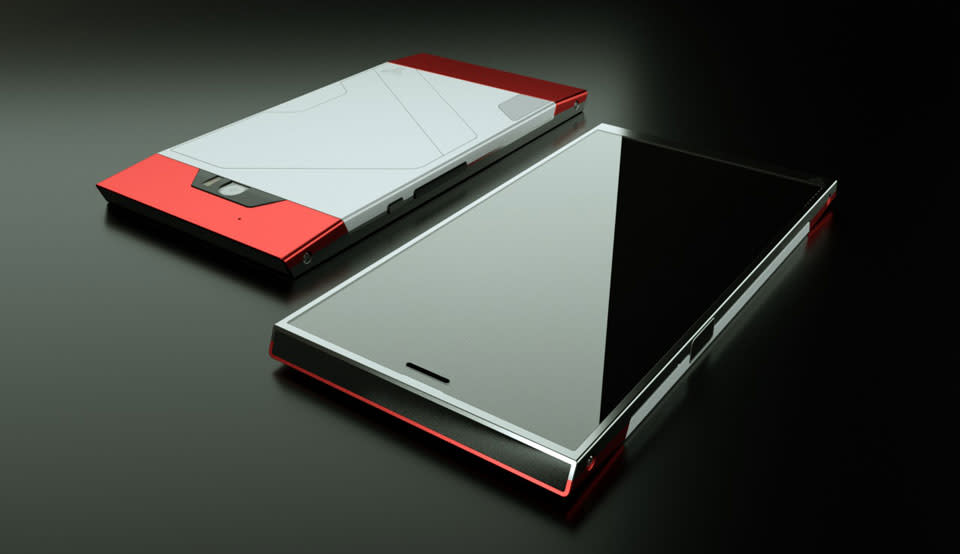 How do you stand out if you're a fledgling smartphone maker that can't compete on specs alone? If you're Turing Robotic Industries, you pour your energy into clever design -- both inside and out. The newly unveiled Turing Phone puts an emphasis on security, with its own server-free encrypted communication between owners and a fingerprint reader that encourages you to lock down your device. There's also an Apple-like magnetic charging system, so you won't send your phone flying. However, the real star of the show is the frame. It's built from "liquidmorphium," a metal alloy that's reportedly stronger than steel or titanium. While there's also aluminum, ceramic and plastic on the body, that exotic structure should reduce the chances that you'll wreck your handset through a nasty drop. Performance-wise, it's not so cutting edge. You're looking at last year's Snapdragon 801 processor, 3GB of RAM and a 5.5-inch, 1080p screen. That's certainly competent, but you probably won't regret snagging that Galaxy S6. Its biggest advantages are a healthy amount of built-in storage (up to 128GB) and the combination of an 8-megapixel front camera and a 13-megapixel rear shooter with dual flashes. There's broad support for North American and European LTE bands, too, so you shouldn't miss out on fast data.

Like the idea? Be prepared to wait, and pay a fair amount. Turing tells us that its phone should ship on August 10th, and it'll sell for $740 unlocked in 64GB form, or $870 for a 128GB variant. There are promises of carrier deals as well, although it's not saying which networks are on deck. Given that many big providers tend to be leery of supporting relative newcomers, a direct order will likely be your best bet.

In this article: android, liquidmetal, liquidmorphium, mobilepostcross, security, smartphone, turingphone, turingroboticindustries
All products recommended by Engadget are selected by our editorial team, independent of our parent company. Some of our stories include affiliate links. If you buy something through one of these links, we may earn an affiliate commission.