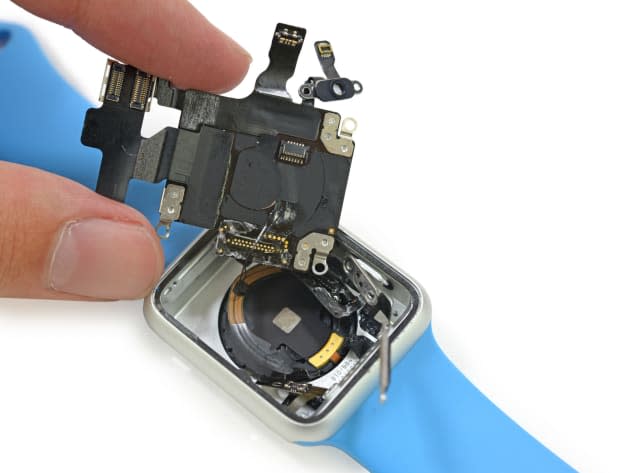 You likely won't be able to repair the Apple Watch on your own -- shocking, we know. The gadget eviscerators over at iFixit put the Apple Watch under the knife today, just as people who've preordered the Watch have begun receiving their shipments. After a complete dissection, iFixit ended up giving the Apple Watch a repairability score of five out of 10 -- making it something you likely wouldn't want to mess with. Removing the screen was "difficult, but not impossible," iFixit said, and once you've dealt with that the battery is "quite easy to remove." But anything beyond the battery, including the Taptic Engine and Apple's S1 chip, is pretty much out of bounds. Basically, if you're getting an Apple Watch, consider an Apple Care plan, or be ready to pay hefty fees in case anything goes wrong.

The teardown also makes it clear you won't be able to easily upgrade the Apple Watch over time. That's something people who invest in the more expensive Steel and gold Edition models might want to take into account. Then again, if you've got enough bank for the Apple Watch edition, you probably won't care about dropping tens of thousands of dollars for a new model. Our guess? Apple could offer a trade-in program for existing Watch owners which would give them significant discounts on newer units.

iFixit also points out that the Apple Watch's photoplethysmographic heart rate monitor looks like it might be able to measure your blood oxygen levels, which isn't something that Apple currently advertises. That could be one of the features Apple reportedly dropped before the Watch's release due to erratic sensors. There's some speculation that Apple might be able to turn on the blood oxygen measuring capability eventually, but that's not likely since it involves measurement using red light -- so far we've only seen green light and infra-red sensors on the Apple Watch.

In this article: apple, Apple Watch, iFixit, mobilepostcross, teardowns
All products recommended by Engadget are selected by our editorial team, independent of our parent company. Some of our stories include affiliate links. If you buy something through one of these links, we may earn an affiliate commission.