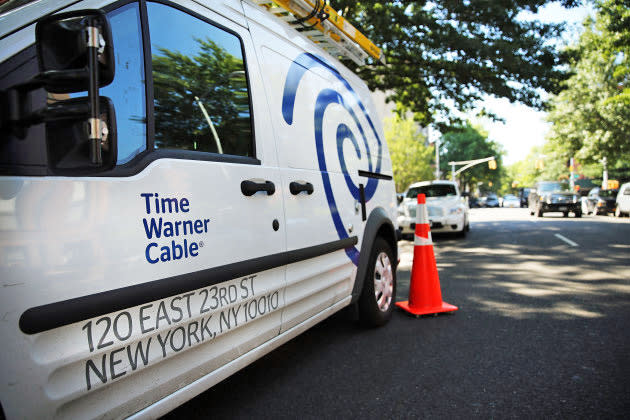 The rather unpopular, $45 billion merger attempt between Comcast and Time Warner Cable has been officially called off. In a very brief statement, Comcast CEO Brian L. Roberts said that he would have liked to pair the two companies together, but governmental pressure has killed the deal. The biggest objection to the deal was that the combination would control the majority of high-speed internet connections in the US, raising the ire of both the FCC and Justice Department. Unlike the failed AT&T - T-Mobile deal a few years back, it doesn't appear as if either party has to pay a severance fee to the other, which should make walking away a little easier.

Update: In a statement, Attorney General Eric Holder said the decision is a victory for "providers of content and streaming services who work to bring innovative products to consumers across America and around the world." Check after the break for other statements from around the industry, including Time Warner Cable and some of the consumer groups that opposed the deal.

Comcast Corporation (Comcast) abandoned its plans to acquire Time Warner Cable Inc. (Time Warner Cable) for approximately $45.2 billion after the Department of Justice informed the companies that it had significant concerns that the merger would make Comcast an unavoidable gatekeeper for Internet-based services that rely on a broadband connection to reach consumers.

"The companies' decision to abandon this deal is the best outcome for American consumers," said Attorney General Eric Holder. "The Antitrust Division of the United States Department of Justice has demonstrated, time and again, that it can and will defend the interests of the American consumer no matter the complexity of the issue or the size of the opponent. This is a victory not only for the Department of Justice, but also for providers of content and streaming services who work to bring innovative products to consumers across America and around the world. I commend the Antitrust attorneys and investigators whose outstanding work led to this outcome, and I know that the Department of Justice will continue to fight for fair access and free competition in every industry and every market."

"I want to thank our colleagues at the Federal Communications Commission for their close and productive cooperation throughout this investigation," said Renata Hesse, Acting Assistant Attorney General of the Department of Justice's Antitrust Division. "The collective expertise of the career staff at both agencies enabled us to analyze the complex issues presented by this transaction and to deliver a consistent message regarding the impact of the transaction on competition and the broader public interest. We are also grateful for the close cooperation we had with teams from many State Attorneys General offices during the course of our investigation."

"We have always believed that Time Warner Cable is a one-of-a-kind asset," said Chairman and Chief Executive Officer Robert D. Marcus. "We are strong and getting stronger. Throughout this process, we've been laser focused on executing our operating plan and investing in our plant, products and people to deliver great experiences to our customers. Through our strong operational execution and smart capital allocation, we are confident we will continue to create significant value for shareholders.

"I'm extremely proud of the professionalism, dedication and resiliency our 55,000 employees have shown over the past year and thank them for their continued commitment to Time Warner Cable."

"Comcast and Time Warner Cable's decision to end Comcast's proposed acquisition of Time Warner Cable is in the best interests of consumers. The proposed transaction would have created a company with the most broadband and video subscribers in the nation alongside the ownership of significant programming interests. "Today, an online video market is emerging that offers new business models and greater consumer choice. The proposed merger would have posed an unacceptable risk to competition and innovation especially given the growing importance of high-speed broadband to online video and innovative new services. I am proud of our close working relationship throughout the review process with the Antitrust Division of the Department of Justice. Our collaboration provided both agencies with a deeper understanding of the important issues of innovation and competition that the proposed transaction raised.

Today's news is the best possible outcome for consumers, who deserve innovative, thriving video and broadband marketplaces. DISH appreciates the months of work by dedicated staff at the FCC and DOJ to conduct thorough, evidence-based reviews to safeguard the public interest and competition.

This is a huge victory for consumers. If Comcast had bought Time Warner Cable, it would have been able to stop new kinds of innovative video services dead in their tracks. Instead, the Federal Communications Commission and Department of Justice have decided to allow competition to work. New online video services shouldn't have to ask Comcast for permission to reach viewers or access content. The efforts by the FCC and DoJ in reviewing this deal set a new high bar for the Obama administration in antitrust and public interest review.

Had this deal gone through, Comcast would have become an industry giant with more than 50% of the nation's broadband connections, dominant in most key media markets. It's clear that the DoJ and the FCC agreed with the hundreds of thousands of members of the public, consumer groups, trade unions, and private companies that told them there was no way this deal should go forward.

This proposed merger was bad news from the beginning. Giving one company control over so much of America's communications is neither pro-consumer nor pro-competition. Everybody knows that. Comcast finally got the message that people can't be fooled into thinking that this merger would benefit cable customers and Internet users in any way.

Comcast's failed bid to control Time Warner Cable should be a lesson for the industry. Communications giants should stop trying to create local monopolies and instead focus on competing to provide the fast, affordable and neutral Internet services that so many Americans demand. That's what people say that they want and need. And we're especially grateful to the more than a million Americans who urged regulators in Washington to reject this deal. Credit also goes to those at the Department of Justice and the Federal Communications Commission who have listened to the public and are seriously working to increase competition and lower the costs of access.

The demise of this merger, alongside the Net Neutrality victory from earlier this year, mark the rise of Internet users as a powerful political constituency that can no longer be ignored by elected officials and policymakers

In this article: acquisition, Comcast, DepartmentOfJustice, FCC, hdpostcross, Merger, TimeWarnerCable, TWC
All products recommended by Engadget are selected by our editorial team, independent of our parent company. Some of our stories include affiliate links. If you buy something through one of these links, we may earn an affiliate commission.