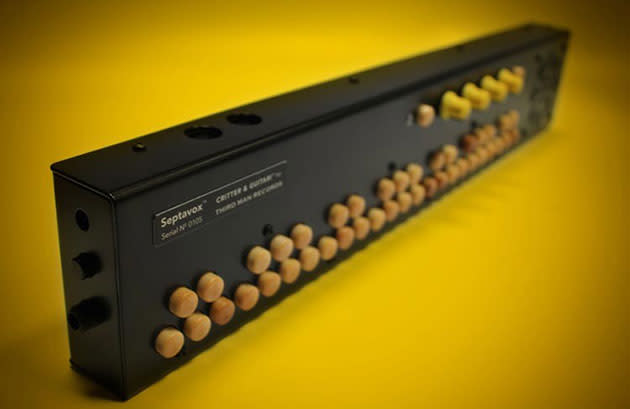 Jack White has been know to go all out for Record Store Day events with his Third Man Records imprint. This year, in addition to transferring Elvis' first recording from acetate to vinyl for release last weekend, White and his label revealed a synthesizer/amplifier combo that offers some stellar retro aesthetics. The pair, which includes the Septavox synth and Terz amp, was designed and built by Brooklyn instrument company Critter & Guitari. If the synthesizer looks familiar, the same outfit also makes a more compact Pocket Piano instrument. For the Third Man version, though, a metal enclosure houses 41 maple keys alongside seven modes and seven tones. That adds up to 49 different sounds, combining electric organ, vibrato and more. There are controls for tweaking parameters, tuning and volume alongside MIDI input/output, too. When it comes to the Terz, there's an all-metal shell to match the synth, with a "hybrid of classic analog amplification circuitry and cutting edge power electronics" cranking out 15W inside. Three knobs handle distortion and volume settings with a 1/4-inch input and gain control on board as well. Looking to nab the set? The Septavox is priced at $395 and tacking on the Terz is an additional $250.

In this article: amp, audio, instrument, jackwhite, septavox, syntesizer, synth, terz, thirdmanrecords, video
All products recommended by Engadget are selected by our editorial team, independent of our parent company. Some of our stories include affiliate links. If you buy something through one of these links, we may earn an affiliate commission.