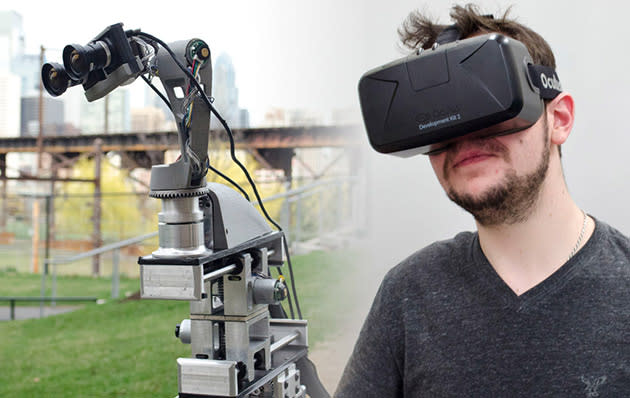 Many commercial telepresence robots are merely screens or iPads on moving platforms. DORA (Dexterous Observational Roving Automaton), however, promises to make users feel like they've been transported to another location when it does become available. The system was created by a team of University of Pennsylvania roboticists who want to provide people a more immersive telepresence experience without draining their bank accounts. Their robot is paired with an Oculus Rift headset, which can track the user's head movements and orientation, whether up/down, left/right or forward/backward. That data is wirelessly transmitted to the robot's Arduino and Intel Edison microcontrollers, prompting its camera-equipped head to follow the user's movements.

Here's how one of DORA's creators, Emre Tanirgan, describes the experience:

You feel like you are transported somewhere else in the real world as opposed to a simulated environment. You actually get to see people interacting with you, as if you were actually there, and it's difficult to recreate the same experience in a virtual environment right now.

Done right, the setup can make you feel like you're really in the meeting room, the office or wherever the telepresence robot is. However, perfecting the system hasn't been easy for the roboticists, who are still trying to reduce the lag time between the user's movements and what's shown on screen. The current lag time is around 70 milliseconds, and shifting to WiFi or 4G from using radio link for the wireless data transfer could increase it even more. That's why the team's aiming to bring it down below 60 ms, since too much lag could lead to motion sickness.

Once DORA's ready for deployment, the team will first make it available to museums offering virtual tours and emergency responders. After them, ordinary consumers could come next, though that obviously wouldn't happen anytime soon.

In this article: dora, OculusRift, telepresence, VirtualReality
All products recommended by Engadget are selected by our editorial team, independent of our parent company. Some of our stories include affiliate links. If you buy something through one of these links, we may earn an affiliate commission.