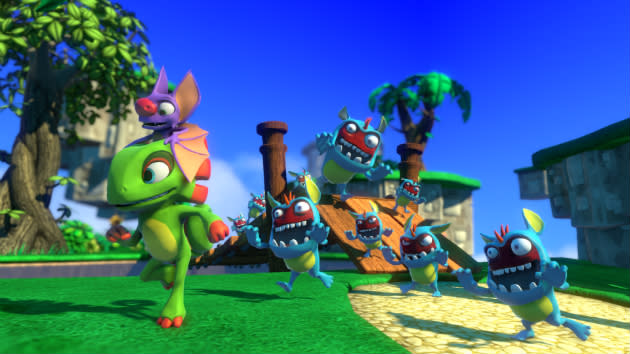 All that the team at Playtonic Games had to say was, "It's a spiritual successor to Banjo-Kazooie," and their project probably would have reached its £175,000 funding goal on Kickstarter. But Playtonic -- a studio composed of former Rare developers -- instead revealed gameplay videos, pretty 3D screenshots, a colorful world and a few songs from their new game, and then they promised it was a spiritual successor to Banjo-Kazooie. That said, Yooka-Laylee blasted past its Kickstarter goal in less than 40 minutes and the numbers just keep on climbing. Andy Robinson, Playtonic's writer and only non-Rare veteran, calls the quick success "incredible."

"Since we first discussed this project at the beginning of the year the response has been amazing," Robinson says. "The fans are what convinced us to go bigger and launch this Kickstarter, and now together we'll hopefully birth not just an amazing modern platform game, but convince other developers that this is a genre the public are very much interested in."

Yooka-Laylee (yes, like the tiny guitar) is a 3D platformer starring Yooka, a bipedal lizard-like dude, and Laylee, a purple "wisecracking lady-bat." They have unique abilities, such as Yooka's tongue-grapple and Laylee's tactical sonar blast, and together these best buds explore five worlds filled with weird characters and feisty bosses. Also, one of the abilities is a "giant fart bubble." Playtonic knows the way to its players' hearts.

Much of our footage, though representative of our goals, will likely be unrecognizable compared to the final product -- in a very good way.

Yooka-Laylee is in development for PC, Mac, Linux, Xbox One, PlayStation 4 and Wii U, with a goal to launch on some of these platforms by October 2016. Playtonic planned ahead with its Kickstarter, listing stretch goals through £1 million that include the addition of more levels, extra bosses, new modes and, lastly, a simultaneous day-one release on Xbox One, PS4 and Wii U.

Everything on the Kickstarter page was created in just three months, a feat that Robinson largely attributes to the team's experience. Still, this is only the beginning.

"It's worth highlighting that what you've seen so far is still very early," Robinson says. "We focused on nailing the characters and tone of Yooka-Laylee the best we could in the time that we had. But beyond that, much of our footage, though representative of our goals, will likely be unrecognizable compared to the final product -- in a very good way."

In this article: BanjoKazooie, hdpostcross, Indie, kickstarter, playtonic, Rare, YookaLaylee
All products recommended by Engadget are selected by our editorial team, independent of our parent company. Some of our stories include affiliate links. If you buy something through one of these links, we may earn an affiliate commission.