Creator of the Roomba robotic cleaner is making a drone 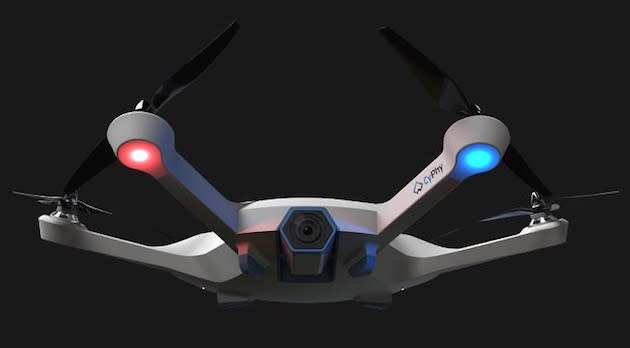 Over the next few years, the market for consumer-facing drones is going to continue growing. And, as they say, the more the merrier. Enter CyPhy LVL 1, a sleek drone brought to you by the co-designer of the Roomba, iRobot's renowned robotic vacuum cleaner, Helen Greiner. She's now the CEO of CyPhy Works, which is a company that focuses on creating aerial robots -- albeit not for hobbyists. But that's about to change soon with its CyPhy LVL 1. Launched via Kickstarter, it is said to be the first drone for everyone, from young kids to old people, featuring a smartphone-based, swipe-to-fly remote interface, instant sharing of captured footage to social networks and geo-fencing.

CyPhy Works points out that the LVL 1 is different from other drones thanks to its Level-Up technology, which keeps it from tilting mid-air and, as a result, should make the flying experience rather simple for anyone to learn. Those of you interested will need to make a minimum pledge of $495 (it was $395 for early birds) -- and if the campaign meets its $250,000 goal, the CyPhy LVL 1 could be showing up at your doorstep next February. Keyword: could. Don't forget this is Kickstarter, after all.

In this article: CyPhy, CyPhy LVL 1, CyPhy Works, CyPhyWorks, Drone, Drones, Roomba, UAV, UAVs
All products recommended by Engadget are selected by our editorial team, independent of our parent company. Some of our stories include affiliate links. If you buy something through one of these links, we may earn an affiliate commission.