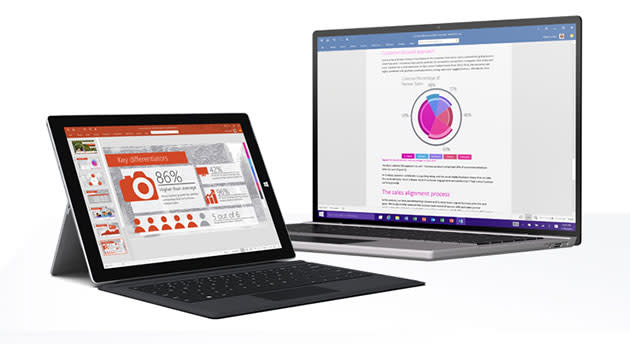 Office 2016 may still be getting the finish touches in Redmond, but Microsoft is opening up its productivity suite for public preview. If you'll recall, some apps were included in previous releases of the Windows 10 Technical Preview and made available for both IT folks and devs. As of today, though, regular folks can get an early look and offer feedback on all the new stuff -- including those redesigned universal apps. This means that you'll gain access to OneDrive attachments in Outlook, real-time co-authoring and retooled applications that learn how you work to lend a hand. Specifically in Excel, there are updated charts and graphs alongside one-click forecasting and more data analyzing tools. Looking to take it for a spin before the official release this fall? Even if you're not an Office 365 subscriber, you can nab a trial version right here.

In this article: apps, excel, microsoft, office, office2016, onedrive, outlook, powerpoint, preview, skype, software, word
All products recommended by Engadget are selected by our editorial team, independent of our parent company. Some of our stories include affiliate links. If you buy something through one of these links, we may earn an affiliate commission.