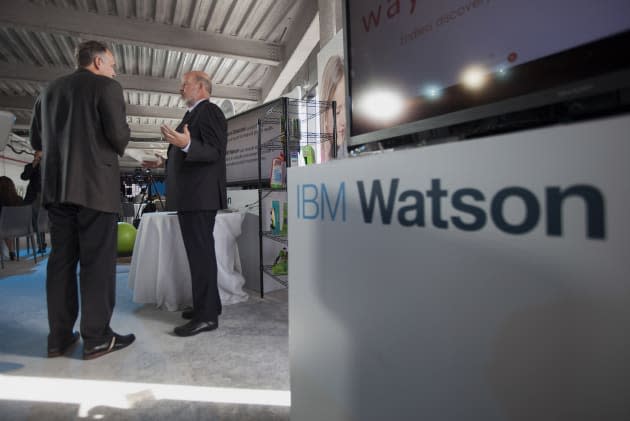 IBM's cognitive computer Watson is on a roll. After spinning it out as a $1 billion division last year, IBM went on to give Watson a flashy new home in Manhattan, made it a more tool for doctors with Watson Health Cloud, and it even proved its culinary chops with a new cookbook. Today IBM showed off several more examples of the supercomputer's growing ecosystem, including new Watson-powered apps that can do things like find you the ideal therapist, or help hotel staff better help guests. It's also partnered with more than a dozen cancer institutes who will use Watson to analyze DNA and offer personalized treatment profiles for patients. It may have started out somewhat gimmicky as a Jeopardy contestant, but IBM is also steadily showing how Watson could also be a truly useful tool for all of us.

What makes Watson special? IBM's earlier supercomputers like Deep Blue and Blue Gene (which was actually a series of machines) were powerful for their time, but they were never focused on applications for normal consumers. Watson, with its natural language recognition and ability to sift through mounds of data, is significantly more user friendly. And while we certainly can't call it conscious, it's IBM's most concerted effort in building artificially intelligent supercomputers.

IBM showed off several Watson-powered apps when it opened its new Watson headquarters last year, but today we got a glimpse at a bit more variety. Decibel, a music discovery startup, tapped into the supercomputer's smarts to build MusicGeek, which could put an end to those baffling song recommendations you get from other music services. Go Moment is using Watson for its Rev1 app, which gives hotel staff a way to quickly respond to questions from guests. And Arria NLG has built an app that helps energy companies stay within regulatory guidelines, making it easier for managers to make sense of thousands of pages of legal and technical jargon.

As for those partnerships with cancer institutes, it's yet another part of the company's Watson Health initiative. Watson has been positioned for a while as a boon for doctors when it comes to diagnosis. Just plug in a few symptoms and Watson can bring up plenty of potentially relevant illnesses -- many that even your doctor might not think of. Now Watson's taking that a step further with DNA analysis.

"Determining the right drug combination for an advanced cancer patient is alarmingly difficult, requiring a complex analysis of different sources of Big Data that integrates rapidly emerging clinical trials information with personalized gene sequencing," said Norman Sharpless, director of the University of North Carolina Lineberger Comprehensive Cancer Center, in a statement. "We are partnering with IBM in an effort to solve this decision problem with the help of cognitive technology and to improve the decisions we make with our patients to maximize their chance for cure."

In this article: IBM, supercomputers, Watson
All products recommended by Engadget are selected by our editorial team, independent of our parent company. Some of our stories include affiliate links. If you buy something through one of these links, we may earn an affiliate commission.