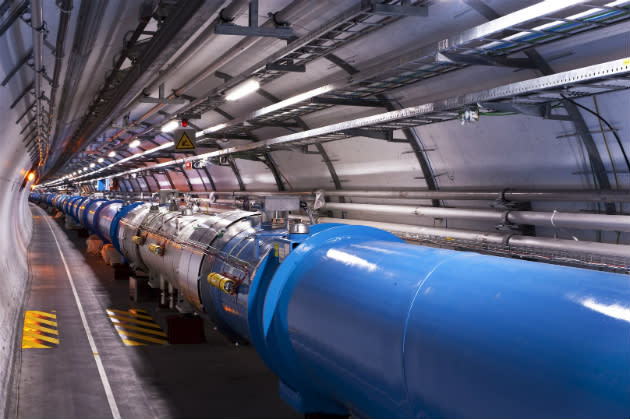 It's been a long wait, but finally CERN's Large Hadron Collider (LHC) is back doing what it does best: smashing protons together. The machine was effectively shut down for two years while engineers in Switzerland carried out important upgrades. Scientists started firing proton beams again back in April, but avoided any collisions while they checked the new components were working properly. Now, CERN has announced that it's carrying out proton-proton collisions again. The beams are being fired at a lower energy of 450 gigaelectronvolts (GeV), however, so that CERN can check its particle detection systems are firing correctly. The plan is to ramp up the LHC so it can handle dual proton beams at 6.5 TeV - almost double what it was operating at before the shutdown -- for 13 TeV collisions later this summer. The Higgs boson was discovered last time, so we're hoping something equally remarkable is uncovered during its sophomore season.

In this article: CERN, Hadron Collider, higgs boson, particle collider, particle collision, particles, protons
All products recommended by Engadget are selected by our editorial team, independent of our parent company. Some of our stories include affiliate links. If you buy something through one of these links, we may earn an affiliate commission.