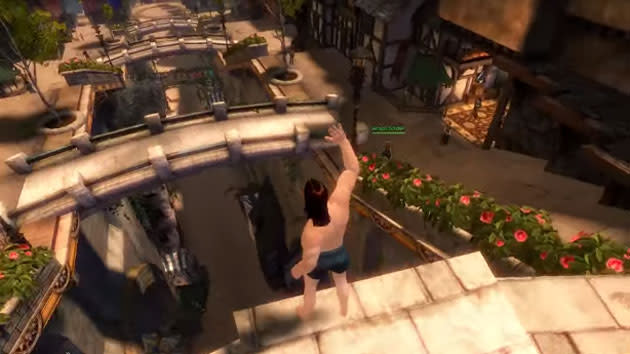 Most cheaters in online role-playing games face an ignominious end. The developers ban them, and that's all she wrote. Not one particularly egregious Guild Wars 2 offender, however. When game developer ArenaNet finally took action against a hacker who had been terrorizing player-versus-player battles for weeks, the security team decided that some public humiliation was in order. It stripped one of the player's characters naked, jumped this persona off a ledge, and proceeded to delete every character linked to the account -- all recorded for posterity on video, as you can see below.

The move is ostensibly a shot across the bow for other cheaters: keep it up and you'll suffer an embarrassing fate. However, the ban raises questions about not just whether or not humiliation is an effective deterrent (if they cared about their reputation, why would they cheat?), but the ethics of ArenaNet's response. Some are concerned that this wasn't very professional, and that the security team should spend more time looking for game hackers than devising clever punishments. Players had been complaining about this culprit for a long while, after all, and it wasn't until they recorded a video that justice was served. This isn't necessarily an either/or situation, however, so here's hoping that the studio both improves its anti-cheating efforts and delivers the comeuppances that malicious gamers deserve.

In this article: arenanet, ban, gaming, guildwars, guildwars2, mmo, mmorpg, rpg, video
All products recommended by Engadget are selected by our editorial team, independent of our parent company. Some of our stories include affiliate links. If you buy something through one of these links, we may earn an affiliate commission.