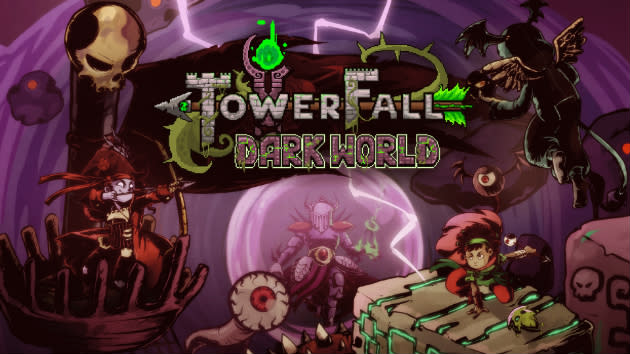 TowerFall Ascension is a glorious little game. It shines as a local, competitive platformer, with players bounding around levels, shooting explosive arrows at each other, dodging and grabbing power-ups such as wings and shields. The first major expansion for TowerFall is called Dark World and it's due to hit PlayStation 4, Vita, PC, Mac and Linux on May 12 for $10, developer Matt Thorson announced today. This is a hefty expansion, adding four new level sets for versus mode, four-player co-op with four original boss fights and a new Legendary difficulty setting, 10 new playable archers, and two new arrow power-ups, Trigger Arrows and Prism Arrows. The fourth and final new level set is procedurally generated, meaning it will be different every time you play. "I have to thank TowerFall players for your patience and support while developing this expansion," Thorson writes. "It took a bit longer than we were expecting but we're thrilled with the result, and we can't wait to hear your feedback."

In this article: DLC, hdpostcross, Indie, MattThorson, towerfall, TowerFallAscension, TowerFallDarkWorld
All products recommended by Engadget are selected by our editorial team, independent of our parent company. Some of our stories include affiliate links. If you buy something through one of these links, we may earn an affiliate commission.