Virtuix is developing a home version of its Omni VR treadmill 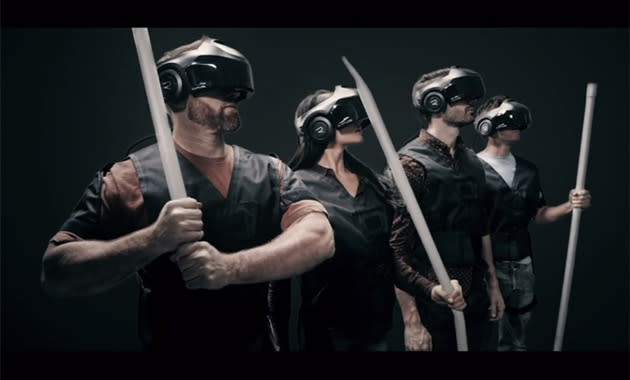 Ken Bretschneider dreams of a virtual reality experience that will have you literally running, jumping around and chasing digital villains. That's why this fall, he'll start building The Void: a virtual reality gaming center with 60 x 60 foot rooms where people can physically play while immersed in another world. Those rooms will be covered in foam and look dull to the naked eye, but the place's VR headset can transform each of them into mountains where dragons dwell, rooms where monsters lurk or the skies filled with enemy pilots. As The Washington Post says, it's like "laser tag on steroids," with each experience lasting around 30 minutes.

Bretschneider told the Post that he and his team of 30 are currently developing the VR tech themselves, as the systems available on the market just aren't good enough. They're working on a headset with a curved screen and 160 to 180 degrees of view, as well as a body-tracking system and gloves that players can wear. He said the body gear's been the biggest challenge, thus far, since they're making sure their computers can instantaneously track a player's actions. If a person's movements on screen lag behind his actions in the real world, it could trigger motion sickness and nausea -- obviously, they don't want that to happen in a foam-covered room.

The Void will be located in Salt Lake City and could open as soon as summer 2016, barring delays. If Bretschneider's plans pan out, it would be the first of many around the globe and would offer new VR experiences every three months. Sounds like a tall order, but he's at least already forming partnerships with game studios and developers to make it happen.

In this article: VirtualReality
All products recommended by Engadget are selected by our editorial team, independent of our parent company. Some of our stories include affiliate links. If you buy something through one of these links, we may earn an affiliate commission.