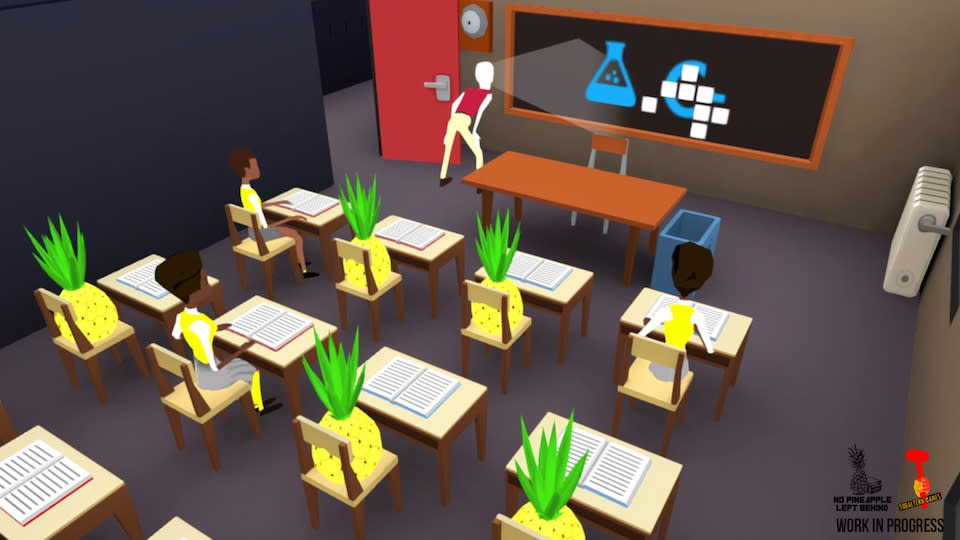 Seth Alter was a teacher for all of six months before quitting his job and going indie to make video games full-time. No Pineapple Left Behind, his second PC title, is more or less the story of why he left his students at a Boston charter school. As a special education math teacher, his sixth graders were expected to meet the same behavioral standards and educational expectations as their mainstreamed counterparts thanks to 2001's controversial No Child Left Behind Act (NCLB), which ties school funding to standardized test scores. Alter says that teacher evaluations are drawn from those scores as well. And because most charter schools are non-union, they can fire teachers for almost any reason, including low test scores from special-needs students who should have been held to modified standards in the first place. It doesn't take a genius to realize just how flawed that logic is: It's a system built to fail.

"A month before I quit, I was talking to a friend about my job and how it was getting me down," Alter says. "I said that the main problem is that the school assumes that all of my [special education] kids are statistics. If I treat them as statistics, everything's fine. But as soon as I start thinking about them as people, all of a sudden there's a problem and I don't have sufficient resources."

By dehumanizing kids and turning them into pineapples, higher test scores are easier because pineapples excel at testing and nothing else.

In Pineapple, you play the role of a principal in charge of a school and your ultimate goal is to earn as much funding as possible. To do that, you need to ensure it produces the highest standardized test scores throughout a dozen different scenarios. By dehumanizing kids and turning them into pineapples (read: statistics) that makes it easier because "pineapples," as they exist here, excel at testing and nothing else. Children are a bit more complicated: They each have their own individual learning styles and interests.

"There's just no management sims I'm aware of that consider the human implications of treating the workers as moneymaking tools," he says.

Alter says that the biggest message he wants to send is that what he's showing isn't exaggerated or that it isn't how the education system might be in a few years -- it's how it is right now. Each of the game's scenarios draw from situations he's witnessed either firsthand or through stories he's heard from friends and colleagues. The busses are always late; classes are overcrowded -- those sorts of things.

Or consider this scenario that's going to ship with the open alpha this summer: A student named David is wearing makeup, but he can't be bullied for an entire week. Your options as the school administrator are as follows: Establish a comprehensive anti-bullying policy (which Alter describes as doable, but finicky and annoying) or turn him into a pineapple. "Pineapples don't wear makeup and they don't get bullied," Alter reasons.

A video showing off the teachers' spell-casting ability.

If this all sounds very serious, well, it really isn't; Alter's tongue is firmly planted in his cheek. Those aforementioned tardy busses? They travel via hyperspace gates and the local bus drivers union installed hyperspace inhibitor fields to ensure the kid-carriers would be late and so everyone in a class would fail.

Remember, these "statistics" are one of the most delicious fruits available, too. Alter's original plan was to have a much more realistic and allegorical school, but to have one difference: that there are pineapples in the school. That didn't last long.

"At some point I said that I should have everything weird, or one thing weird," Alter says. "I can't do anything in between or it wouldn't be as funny."

Naturally, he opted for the former -- hence magic spells subbing in for lesson plans, and lasers for, well, you'll just have to see for yourself. Alter says that in his experience, teachers have an incredibly dark sense of humor behind closed doors as a coping mechanism, and you'll see that throughout the game. For example, he put the "fire" button right next to teacher salaries in the interface.

But why pineapples when maybe cherries or watermelons would do the trick? Two reasons. Alter says pineapples are "maybe impossible" to anthropomorphize and it's a jab at a standardized test question (PDF) in New York that involved talking pineapples. Seriously: A talking pineapple apparently challenges a hare to a race, loses and the rabbit and his pals eat the pineapple. Dark! The whole video below about standardized testing is incredible and you should watch all of it, but if you're short on time, Last Week Tonight with John Oliver breaks the ridiculousness of the pineapple question down at around the 12:20 mark.

It's this type of humor that Alter's most comfortable with. Throughout our conversation, he's jovial and quick to laugh. Even when talking about the lasting implications of charter schools and NCLB, he has a smile on his face while we talk over Skype. He uses humor to reach an audience and teach them. That could be partly why the teacher's he's told about the game are excited to play it.

"I've been getting a lot of positive feedback across the board saying, 'You've described my job. You haven't described the game yet,'" Alter says. "Every teacher that I've talked to wants to play this."

Despite what seems like a consensus on the damage standardized testing is doing, Alter doesn't see NCLB going away anytime soon. "It's made a series of lasting institutional changes that are going to be difficult or near impossible to undo," he says. For starters, he notes that NCLB's given rise to charter schools, which exist as a measure of destroying collective bargaining rights.

He says that there's no future in going back into education, even if video games don't work out for him. And even though he might not be standing in front of a chalkboard anymore, Alter still has a desire to teach and he'd rather do it as a game developer than work under what NCLB would force him to. There's no going back for Alter even if he fails.

"If I were to teach, I'd be back in the school that I'm depicting," he says. "Hell no!"
In this article: education, gaming, hd, hdpostcross, IndieGames, NoChildLeftBehind, nopineappleleftbehind, politics, sethalter, subalterngames, uk-feature
All products recommended by Engadget are selected by our editorial team, independent of our parent company. Some of our stories include affiliate links. If you buy something through one of these links, we may earn an affiliate commission.