Apple News had a one-week exclusive on a documentary series 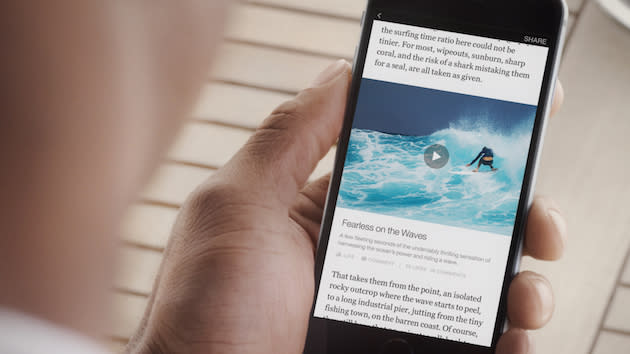 Facebook wants to do for news content what it's done with native video, and the first bit of self-hosted editorial content ("Instant Articles") could go live tomorrow. It's starting with The New York Times and will include Buzzfeed, NBC News and National Geographic if unnamed sources speaking to New York Magazine are to be believed. Apparently NYT's business side is why a deal that surfaced in late March is only coming to fruition now, with CEO Mark Thompson's push for "the most favorable" terms causing delays.

A Wall Street Journal report says The Social Network is offering to let publishers keep 100 percent of the money from ads they sell against an article, or 70 percent if Facebook sells the ad. That bit is incredibly important because without traffic going to, say, nytimes.com, and staying on Facebook instead, a publication could lose its ability to pay the bills and its employees. The big argument seems to be that NYT is working to insulate its million-plus digital subscribers from free content hosted on Zuckerberg's baby, thus rendering a subscription kind of pointless. Regardless of if this is happening tomorrow or not, we won't have to wait too long before we find out.

Update: That didn't take long. Facebook's officially unveiled Instant articles, crowing that the reason for the move is, as rumored, to do with page loads. Publishers have access to traffic and data analytics too, and can tailor articles to use the platform's features which include tilt-to-zoom high-res images. For now, Instant Articles is exclusive to iPhone users. And the full slate of content partners (NYT, NatGeo, BuzzFeed, NBC News, The Atlantic, The Guardian, BBC News, Spiegel and Bild) isn't available yet, with only the first four on offer at the moment. Two of those, Buzzfeed and NYT, have explanations regarding the hows and whys of the partnerships.

The ad and analytics are perhaps the most important news for publishers because they offer similar tools to what they likely already have in place internally. It's worth noting, however, that when something doesn't pan out Facebook has a habit of killing it off. Remember Home and Paper? Yeah, we barely can either.

In this article: buzzfeed, facebook, instantarticles, Internet, NationalGeographic, nativepublishing, NbcNews, news, NewYorkTimes, nyt, Publishing, video
All products recommended by Engadget are selected by our editorial team, independent of our parent company. Some of our stories include affiliate links. If you buy something through one of these links, we may earn an affiliate commission.