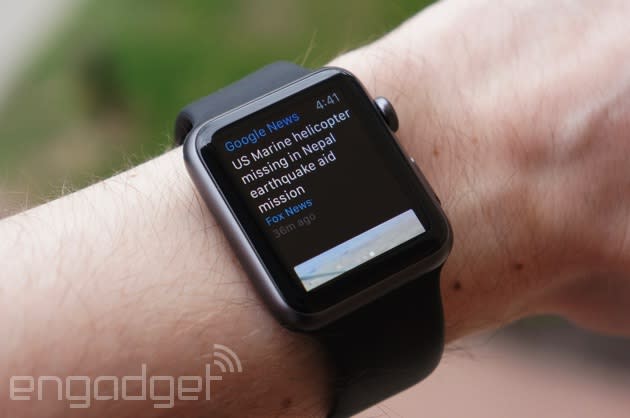 If you were gutsy enough to buy an Apple Watch on launch, you've likely been asking a common question: where are the Watch-savvy Google apps? Well, one of them is finally here... although it's probably not the one you want. The search firm has updated Google News & Weather with support for Apple's wearable, so you now have a quick way to scan major headlines from your wrist. It's definitely convenient, although these tidbits take a while to load and don't include the "weather" part of the iOS app. However, the real question is when the Google apps that you're likely to use will show up. It'd be great to dictate Hangouts messages or triage an overflowing Gmail inbox.

In this article: app, applewatch, google, googlenewsandweather, internet, mobilepostcross, news, newsandweather, smartwatch, watch, wearable, weather
All products recommended by Engadget are selected by our editorial team, independent of our parent company. Some of our stories include affiliate links. If you buy something through one of these links, we may earn an affiliate commission.