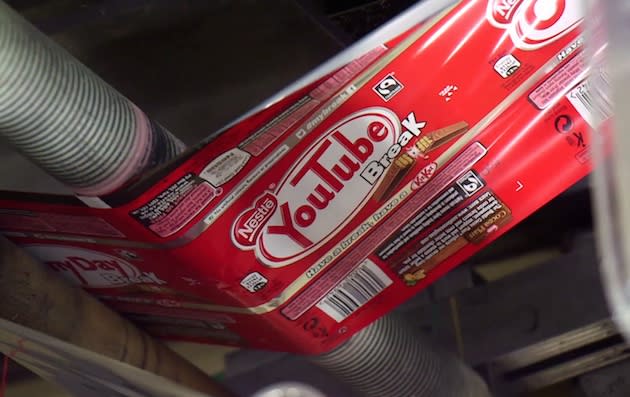 Remember when Google teamed up with Nestle and went and named a flavor of Android after a four-fingered chocolate bar? Turns out it wasn't the last we'd see from this unlikely partnership. To celebrate 80 years since the KitKat went on sale, the two companies announced today that 600,000 "limited edition" packs will feature the name "YouTube Break" instead of the familiar KitKat logo in the UK. According to Nestle, it'll form just one of 72 different "breaks" that will feature on more than 400 wrapper designs. The plan is to produce 100 million packs, with the search giant only playing a small role. That said, YouTube will get involved, allowing smartphone owners to watch the day's top trending videos with a "OK Google, YouTube my break" voice search. If you didn't think things could get more sickly sweet, Google and Nestle just proved you wrong.

In this article: break, google, kitkat, mobilepostcross, nestle, voice search, youtube
All products recommended by Engadget are selected by our editorial team, independent of our parent company. Some of our stories include affiliate links. If you buy something through one of these links, we may earn an affiliate commission.