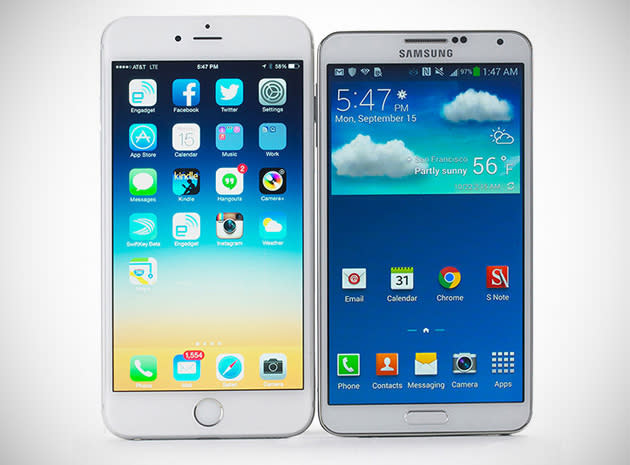 The Great Apple/Samsung Legal Throwdown of 2012 ultimately resulted in the Korean company having to pay a whopping $930 million in damages for violating Apple intellectual property... or it did, until this morning. A Federal Circuit Court of Appeals ruled earlier today that while Samsung did indeed violate Apple's design patents, it didn't do the with same Apple's trade dress — broader elements of design and aesthetic that dictate the presentation of Apple's gadgets. With that bombshell dropped, the court has asked for an update on the damages to be awarded sans the trade dress stuff, which should work out to a roughly $382 million discount for Samsung.

Let's flash back to the heady days of 2012 for a moment. During the heat of the trial, Apple presented a handful of examples of (unregistered) trade dress that it believed Samsung had infringed upon with devices like the Galaxy S and Nexus S. While some of Apple's examples — "a rectangular product with four evenly rounded corners," "a flat, clear surface covering the front of the product" — the company tried to argue that they were just for show and had no impact on usability. After some further investigation, the appeals court disagreed with the argument, saying that "the requirement that the unregistered trade dress 'serves no purpose other than identification' cannot be reasonably inferred from the evidence". That is to say, since trade dress protection only applies to design elements that are nonfunctional and these design choices were seemingly made for the sake of customer comfort, Apple's argument is out.

If you're itching for some juicy documents to kick off your Monday, the full decision (courtesy of AppleInsider) can be found below.

United States Court of Appeals for the Federal Circuit ruling on Apple v. Samsung by appleinsider

In this article: android, apple, applevsamsung, galaxy, galaxy s, iPhone, lawsuit, mobile, mobilepostcross, samsung
All products recommended by Engadget are selected by our editorial team, independent of our parent company. Some of our stories include affiliate links. If you buy something through one of these links, we may earn an affiliate commission.