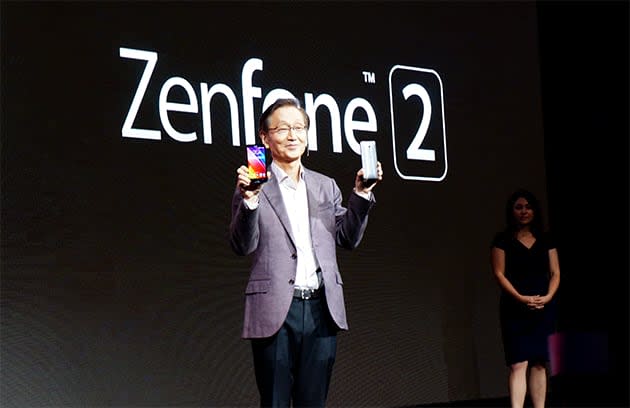 ASUS' ZenFone 2 isn't exactly an unknown quantity -- we first saw it at CES earlier this year, and since then, the thing's been trickling onto store shelves around the world. Still, after a surreal, slightly awkward/slightly cool dance number, Chairman Jonney Shih made an appearance in New York to talk about bringing the company's newest flagship(s) to the US. Long story short, we're getting two models around these parts, one that'll cost $199 off-contract and another that'll run you $299. Read on for a better sense of that your hard-earned scratch will get you. The nicer of the two ZenFones comes with Intel's 2.3GHz quad-core Z3580 chipset, 64GB of internal storage and 4GB of dual-channel RAM, a first that Shih and his crew are happy to crow about. We don't often see Intel chips in high-end smartphones, but this one should be a real barn-burner if the 3DMark and GFXBench benchmarks trotted out onstage are any indication. The cheaper model runs with a slightly pokier 1.8GHz chipset and 2GB of RAM, along with a scant 16GB of storage.

Behind those 5.5-inch 1080p screens, though, you'll also find a cellular radio that supports LTE Cat4 with carrier aggregation (long story short: You could theoretically get data speeds of up to 250 Mbps in the right markets) and a 13-megapixel camera tricked out with a slew of ASUS' photography tricks. Throw all that into arched bodies festooned by meticulously etched concentric circles and you've the ZenFone 2 in an impressively cheap nutshell. Interest piqued? So's ours. Thankfully, the wait at this point is basically nil: You'll be able to pick one up starting tomorrow (also known as May 19th) in the US from Amazon, B&H, Newegg and Groupon... for some reason.

In this article: android, asus, mobile, mobilepostcross, smartphone, video, zenfone, zenfone 2, zenfone2
All products recommended by Engadget are selected by our editorial team, independent of our parent company. Some of our stories include affiliate links. If you buy something through one of these links, we may earn an affiliate commission.