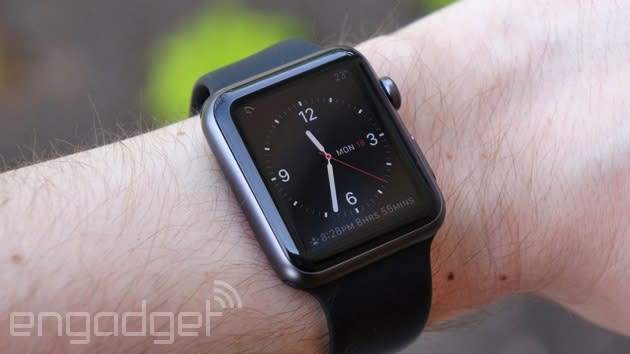 The Apple Watch arrived on the scene with at least a few rough edges, but the crew at 1 Infinite Loop is trying to smooth at least some of them today. The company has released a 1.0.1 update for the Watch that improves performance across the board, and should be a particular help with third-party apps hosted on your iPhone -- many of which seemingly took forever to load in the original release. The difference isn't dramatic in our experience, but it is there. Your wristwear should also do better jobs with Siri voice recognition and calculating fitness data (such as calories and distance), and the interface supports seven extra languages ranging from Brazilian Portugese to Turkish. This doesn't include any of the big interface-level features hinted at in recent rumors, but it's good to see Apple's first wearable get some much-needed polish.

In this article: apple, applewatch, mobilepostcross, smartwatch, update, watch, wearable
All products recommended by Engadget are selected by our editorial team, independent of our parent company. Some of our stories include affiliate links. If you buy something through one of these links, we may earn an affiliate commission.