Latest in Code as a second language 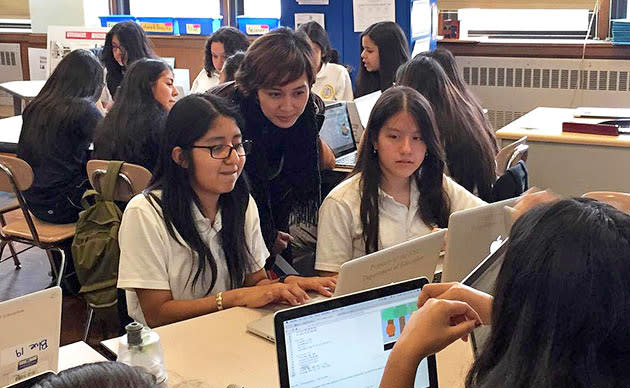 The Hispanic Heritage Foundation's (HHF) president, Jose Antonio Tijerino, thinks that "seeing a latino programmer shouldn't be akin to seeing a unicorn," so his group is trying to do something about it. Together with Google, it launched Code as a Second Language (CSL) courses in eight cities, including New York, Las Angeles and Miami. The idea is to introduce students to coding through 1-2 hour sessions, then steer them to the LOFT (Latinos on Fast Track) network for ongoing online instruction. Students who complete that training could later be granted internships and possibly full-time positions with Fortune 500 companies.

Volunteers or teachers learn to train kids on basic coding through a program called CS First. Google and the HHF plan to implement the CSL program in 30 additional LA schools later on, and launch pilot CSL programs at the Mexican consulates in San Jose and Washington, DC. Meanwhile, schools interested in the program can sign up here, and volunteers instructors can enlist at this link. Google also runs the Made with Code program for girls and obviously has some self-interest in developing programmers (as does Apple, which just launched its own initiative). But given that only 1 in 10 US schools teach coding, along with the lack of women and minorities in tech, the efforts are certainly welcome.

In this article: Code as a Second Language, Coding, CSL, google, Hispanic, Hispanic Heritage Foundation, LOFT
All products recommended by Engadget are selected by our editorial team, independent of our parent company. Some of our stories include affiliate links. If you buy something through one of these links, we may earn an affiliate commission.