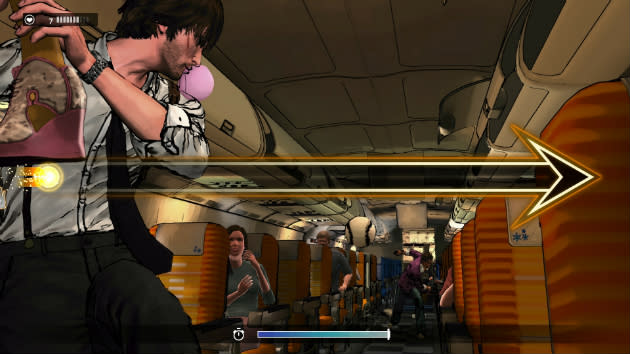 D4: Dark Dreams Don't Die is a wonderfully strange detective game with a twist: There's a bullet lodged in your skull that allows you to touch certain objects and travel back in their timelines, to places and events pivotal to their existence. As a hardened Boston investigator, you're searching for the people who brutally killed your wife a few years ago, and along the way you run into a foul, potentially supernatural criminal organization. When D4 launched in 2014, it was exclusive to Xbox One and was a surprisingly successful Kinect game, using voice and motion controls in fun and immersive ways. Now, it's heading to PC on June 5th, priced at $15 on Steam, GOG, Playism and the Humble Store.

D4 creator Hidetaka Suehiro, who goes by "Swery," announced the PC version back in April, but provided few details at the time. Now, we know that D4 will hit PC with a lineup of changes, including all Xbox DLC, the option to play at 60FPS, and no more motion and voice controls. See the full change list below, provided by developer Access Games, and prepare yourself for mind-melting wackiness.

Synchronous Kinect inputs have been changed to new mouse commands.
・Actions like wiping the windows and fixing the switchboard have been customized for
mouse controls.
・Other features like changing posture can now be done with the mouse.

Along with the above changes, the user interface has also been redone.
・Changes have been made to the affected areas in order to fit the mouse controls.

Item parameters and locations have been revised.

Options unique to the PC version have been added.
・Resolution Settings
・Window / Full Screen Settings
・Vsync ON / OFF
・Dynamic Shadows ON / OFF
・Subtitle Language Settings（EFIGSPJ supported）

The game now runs at 60fps.
*Only capable when using the recommended settings.

Load times have been shortened.

Previously discovered bugs have been fixed.

Content unique to the Xbox ONE version has been removed.
・MELD compatibility
・Leaderboards

In this article: accessgames, d4, D4DarkDreamsDontDie, gog.com, hdpostcross, humblestore, pc, playism, STEAM, swery65
All products recommended by Engadget are selected by our editorial team, independent of our parent company. Some of our stories include affiliate links. If you buy something through one of these links, we may earn an affiliate commission.