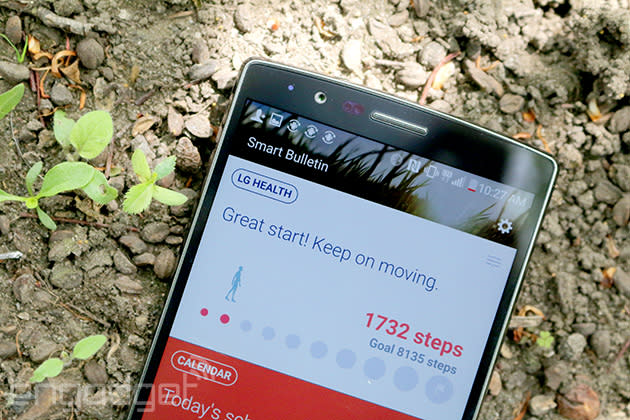 Have you been eyeing LG's latest flagship handset since it was announced last month? Well, it's set to arrive in the US next week. T-Mobile began selling the G4 online today, for $0 down and $25/month for two years or $599.76 if you're looking to part with a lump sum. The pink-hued carrier is looking to lure early adopters with an extra that'll make good use of that microSD card slot. If you opt in "while supplies last," you can expect a free 128GB card for free. And T-Mobile's the spot to grab that dapper brown leather rear cover. The LG G4 won't go on sale in stores until June 3rd, so nabbing one now means yours will ship before the phone hits retail. Not a fan of T-Mobile? Fret not.

Sprint announced last week that it would start selling the G4 on June 5th Metallic Gray and Leather Black. The carrier also has the same deal as T-Mobile ($0 down, $25/month for 24 months), on top of the two-year contract price of $200. And yes, you can still forgo the commitment for $600. Verizon's version of G4 will be available June 4th, but it's taking pre-orders starting tomorrow. Spacing out the payments over 24 months will set you back $22.91/month with Big Red and buying the handset outright with no contract costs $550. Opting to go with Verizon still gets you the phone in either Metallic Gray or Leather Black and there's also a number of bundles that tack on an LG tablet or the LG Watch Urbane for some extra dough.

If you still aren't happy with those options, US Cellular will have the G4 up for grabs on June 4th. Unfortunately, there's no word on when the handset will be available from AT&T just yet. LG's offering offering added perks to get you splurge for the device with an extra battery, charging cradle and 32GB microSD card available by mail -- if you purchase before June 21st. What does opening up your wallet to any of these carriers get you? On top of the aforementioned expandable storage, there's great battery life, a 5.5-inch vibrant IPS Quantum display, capable 16-megapixel camera and more.

In this article: att, g4, lg, lgg4, mobilepostcross, nowavailable, phone, phones, smartphone, smartphones, sprint, t-mobile, tmobile, uscellular, verizon
All products recommended by Engadget are selected by our editorial team, independent of our parent company. Some of our stories include affiliate links. If you buy something through one of these links, we may earn an affiliate commission.