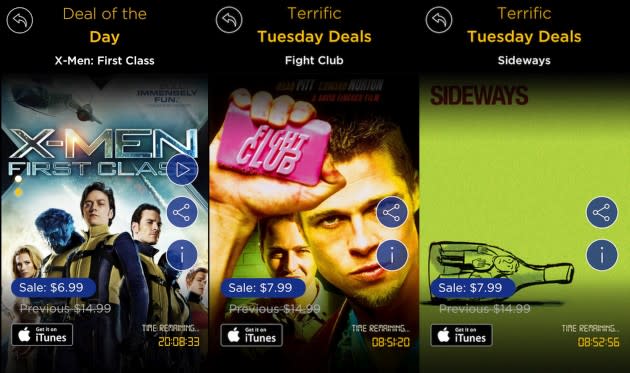 Fox and Apple are trying a new twist on digital movie sales starting today, pushing a Movie of the Day app on iOS. For now, it's only for Apple devices and Fox movies (a Google Play version should arrive eventually), but as you can guess from the name it just does the one thing. "Daily Flash Sales" offer a single movie, heavily discounted (up to 70 percent off, somewhere between $5 and $10), for purchase for 24 hours, with the app highlighting which one and pointing users to it. It's launching in the United States, Canada, United Kingdom, Australia, Germany and France today and the first flick for sale is a $7 copy (in HD or SD, and you could just grab it via iTunes) of X-Men: First Class. Movies like Alien, Die Hard, Ice Age, Planet of the Apes, Rio, and The Sound of Music will float through its library, so if you're interested in filling up your Apple-connected digital shelf it could be worthwhile.

Witness the beginning of an app that gives you movie discounts every day! Get #XMenFirstClass for $6.99 TODAY ONLY! https://t.co/mH2GTE1VnF

In this article: apple, fox, FoxHomeEntertainment, hdpostcross, iOS, iTunes, mobilepostcross, MovieoftheDAy
All products recommended by Engadget are selected by our editorial team, independent of our parent company. Some of our stories include affiliate links. If you buy something through one of these links, we may earn an affiliate commission.