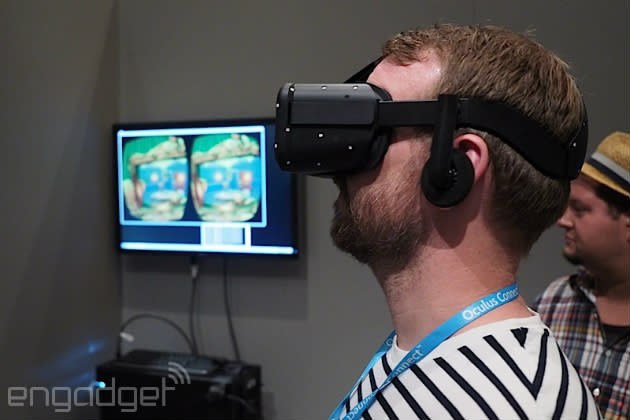 The Oculus Rift is prepared to melt your perceived reality in early 2016 -- if you have the proper PC. If not, a new, Rift-ready PC plus the headset itself should cost around $1,500, Oculus CEO Brendan Iribe said today at the Re/code conference. "We are looking at an all-in price, if you have to go out and actually need to buy a new computer and you're going to buy the Rift... at most you should be in that $1,500 range," he said (via Re/code). He didn't provide a standalone price for the Rift, but Oculus has already divulged its recommended PC specs and they're fairly hefty.

Oculus Chief Architect Atman Binstock said earlier in May that these specs will apply to the lifespan of the Rift and that the price of such a powerful rig should drop over time. Iribe echoed that idea today, noting that he'd like to see the total price dip below $1,000. Previous Rift development kits -- that's just the headset, no PC -- have been priced around $350.

Now we have two ballpark figures for the Oculus Rift: A vague "Q1 2016" release window and an even more nebulous "$1,500 or cheaper" price point. One day we'll get a straight answer out of you, Oculus. One day.

In this article: BrendanIribe, facebook, hdpostcross, oculus, OculusRift, pc, price, timeline16oculusrise, VirtualReality, vr
All products recommended by Engadget are selected by our editorial team, independent of our parent company. Some of our stories include affiliate links. If you buy something through one of these links, we may earn an affiliate commission.