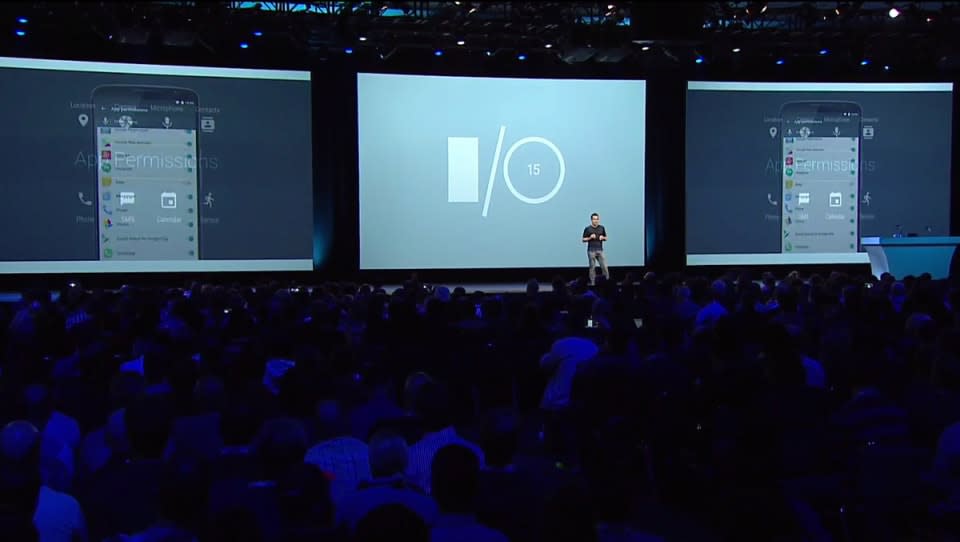 Like clockwork, Google lifted the veil on Android M at its I/O developer conference today, an event that's traditionally served as the company's launchpad for its mobile OS updates. No, we don't yet know what the "M" stands for (we'd love to see Android Marzipan), but, as usual, that's not stopping Google from divulging details. After the bold redesign that was Android Lollipop, M is more focused on refining the entire Android experience. "For [Android] M, we've gone back to the basics," said Google SVP Sundar Pichai. "We've really focused on polish and quality; we've literally solved thousands of bugs." While there's still no firm release date for Android M, developers can give it a spin today with a special preview release for the Nexus 5, 6, 9 and Player set-top box. Those improvements start with more granular app permissions, breaking them down into categories like location, camera and contacts. And rather than dealing with permissions before you install an app, you'll be prompted as the apps require specific features (yes, a lot like iOS). David Burke, VP of engineering at Google, showed off the new permissions onstage by having WhatsApp request microphone access. The new permissions should make it a lot clearer what exactly apps are doing on your phone -- they're certainly a lot more informative than the dump of security information we've seen on Android up until now.

Android M will also let developers improve the web experience inside of their apps by using Chrome Custom Tabs. Pinterest, for example, now pops up speedy little web windows whenever you tap on a link. Basically, developers will be able to make their in-app web experiences feel just like the apps themselves. Google's also making deep linking between apps a core feature of Android M, which allows apps to point to specific screens in other apps. (Think of it like being linked to a specific web page, rather than just a home page.)

Naturally, Android Pay, Google's revamped mobile payments offering announced earlier this year, will also play a big role in Android M. It'll let you buy things at NFC-equipped retailers with your phone, and it should be even more secure than traditional credit cards since it creates virtual card numbers for every purchase. Google says more than 700,000 locations will support Android Pay, and it'll also work with Visa, MasterCard, AmEx and Discover cards. As for carriers, it'll be supported on AT&T, Verizon and T-Mobile.

Google's also standardizing fingerprint authentication with Android M. It'll support Android Pay transactions, both in stores and in apps, and of course it supports unlocking your phone with your fingerprint.

Android M sports a new feature called "Doze," which uses your phone's sensors to tell when it's not being used and conserve power. Google says Doze doubled the battery life of Nexus 9s that it tested -- it'll be interesting to see how it'll impact phones, which get moved around much more than tablets. Not surprisingly, Android M will also support USB Type-C cables, which should allow for faster charging. Since they're bidirectional, you'll also be able to charge other devices from your phone over USB Type-C.

Overall, there aren't many surprises with Android M. Google's focus on polish makes plenty of sense now, although it's hard not to notice that it's playing catch-up with Apple with Android Pay, app permissions and fingerprint authentication. That's not necessarily a knock against Google -- Apple's also lifted plenty of concepts from Android -- but it shows how much further ahead Apple is in new technologies like mobile payments and biometric security. Google's likely not done yet, though -- I wouldn't be surprised if we see plenty more new Android M features announced over the next few months.

In this article: AndroidM, google, googleio2015
All products recommended by Engadget are selected by our editorial team, independent of our parent company. Some of our stories include affiliate links. If you buy something through one of these links, we may earn an affiliate commission.