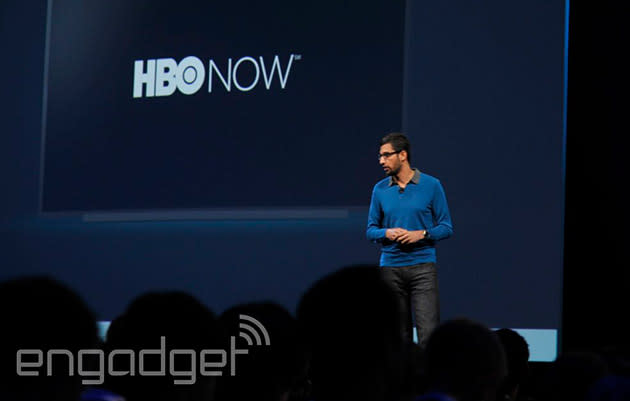 That Apple-exclusive streaming window is ending -- Google exec Sundar Pichai just announced that HBO Now is coming to Android too. Whether you use Android, iOS or a web browser, Google Cast support is coming too -- for the 17 million or so Chromecasts out there -- although there weren't exact details on when. HBO says it's coming "this summer," and Pichai mentioned it will be in time for the upcoming True Detective season, which premieres June 21st. There weren't any details on how, but it sounds like Google Play will offer subscriptions in the same way Apple (and Cablevision) have so far. Finally, whether you have cable or are a cord-cutter, HBO confirmed that HBO Now and HBO Go are both coming to Android TV soon. HBO VP Bernadette Aulestia says, "We have seen through social media that there is great demand for the service among Android and Chromecast users and we're excited to deliver HBO Now to them," so it looks like someone has been reading your posts.

In this article: android, chromecast, google, googleio2015, HBO, HBONow, hdpostcross, mobilepostcross, streaming
All products recommended by Engadget are selected by our editorial team, independent of our parent company. Some of our stories include affiliate links. If you buy something through one of these links, we may earn an affiliate commission.