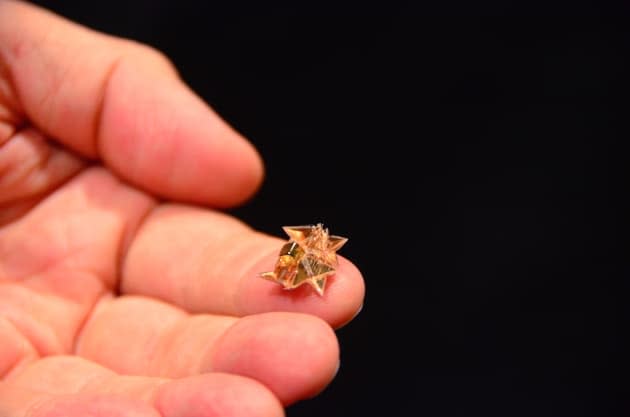 MIT recently unveiled -- or rather, unfurled -- an unusual drone specimen. The tiny robot weighs a third of a gram and is just 1.7 cm long. It starts its existence as a flat, paper or polystyrene wafer. When activated with a small heat source, the drone folds itself up into the complex shape you see above and can begin moving (or swimming!) at a rate of 3 cm/sec.

The drone's movement is "powered" by two sets of magnets: a neodymium magnet integrated into the robot itself and another four electromagnetic coils located under the operating surface that attract and repel the onboard magnet as needed. Technically, the magnets cycle on and off at 15 Hz, causing the onboard magnet to rattle in time, driving the asymmetrical feet and moving the robot. When you're done using the drone, simply drop it into an acetone bath and the external structure will completely dissolve, leaving just the magnet behind. The MIT team, led by Shuhei Miyashita, debuted the robot at ICRA 2015 in Seattle yesterday. They hope that future iterations will dissolve entirely as well as be able to fold itself within your body, operate autonomously (doing lord knows what to your gut), then melt away without a trace.

In this article: drones, magnets, MIT, robots
All products recommended by Engadget are selected by our editorial team, independent of our parent company. Some of our stories include affiliate links. If you buy something through one of these links, we may earn an affiliate commission.