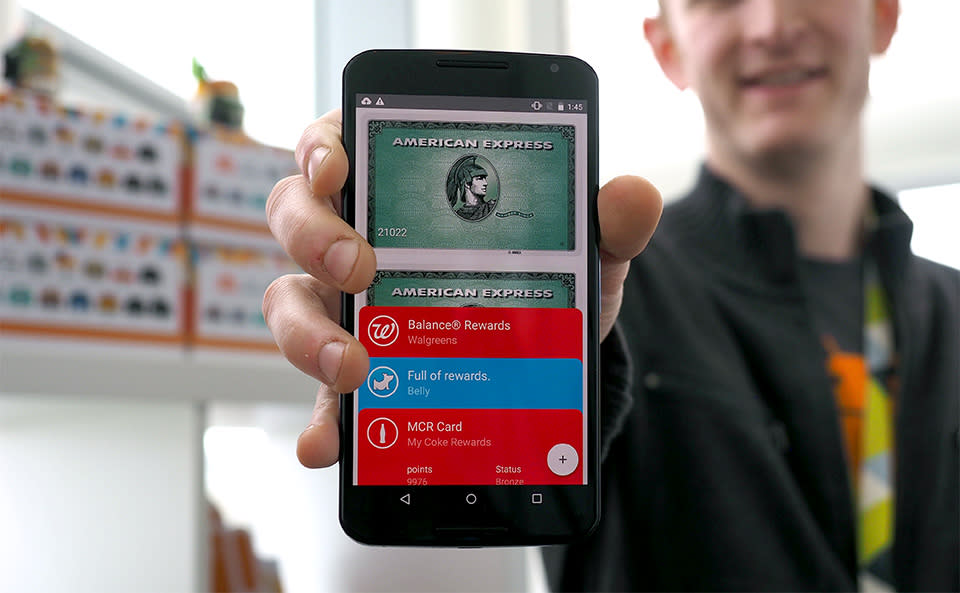 Even though Google started the whole mobile payment thing years ago with Google Wallet, it never really took off with the masses. Google's newly announced Android Pay, however, might. Just like Google Wallet, Android Pay lets you simply tap your phone on an NFC terminal to make a purchase, but with a little less hassle -- there's no need to enter in a PIN to enable payments. In addition, Google is also allowing Android Pay to be integrated in apps like Lyft, Grubhub and Wish, so users can easily use that to pay for things. I just used Android Pay here at Google I/O, and I can say this: If it's as easy to use in real life, then I suspect mobile payments are about to be a lot more ubiquitous. Google had set up a Coke vending machine in the press area at I/O for the Android Pay demo, along with a couple of Nexus devices that were already preloaded with the software. To buy a Coke, all I had to do was tap a Nexus 6 to the terminal, and I saw an American Express card along with a MyCoke Rewards loyalty card appear on the screen. This, a Google spokesperson tells me, is because the phone is smart enough to know that I'm using Android Pay at a Coke vending machine.

It showed me how many rewards points I had, and I could then choose to either pay with points or the card. I opted for the former, confirmed the purchase, selected my choice and out came a 20-ounce bottle of Coke Zero from the dispenser. The spokesperson tells me that the same thing could work if you're shopping at Walgreens or any other merchant with a rewards program -- the phone will recognize where you are and offer up the appropriate points info. Android Pay should be compatible with any phone with Android 4.4 or higher, though Android M will offer up fingerprint authentication as well.

I also used a Nexus 5 with Android Pay to make an in-app purchase. Next to the Coke machine was a "store" of sorts with a variety of Android gift items like t-shirts and mini-collectibles. Using an app called Wish, I was able to select what I wanted -- an Android toy in this case -- and then selected the "Buy with Android Pay" button. I go through the usual cart check out process, and I was done -- no need to enter my card information or anything. The same would go for other apps like Lyft, Uber, and GrubHub.

The whole process strikes me as practically identical to that to Apple Pay. Even the appearance of the credit card wallet on the Android Pay interface looks very similar. In fact, just like Apple Pay, the transactions are sorted through something called tokenization, where a virtual account number is created and shared with merchants to manage payments.

But what about Google Wallet? Well if you already have a Wallet account, you can choose to transfer over all of your Wallet-linked cards to be used in Android Pay. Wallet itself isn't going away either -- you can still use that for peer-to-peer payments.

As for which merchants will support Android Pay? Well, a lot -- over 700,000 retailers will be on board, including Macy's, Whole Foods and Walgreens. Basically, any place that offers Apple Pay, will also be Android Pay compatible. That means that pretty soon, almost anyone with a relatively modern smartphone will be able to pay for things with their phone. Now to see if that actually happens.

In this article: android, androidpay, google, googleio, googleio2015
All products recommended by Engadget are selected by our editorial team, independent of our parent company. Some of our stories include affiliate links. If you buy something through one of these links, we may earn an affiliate commission.