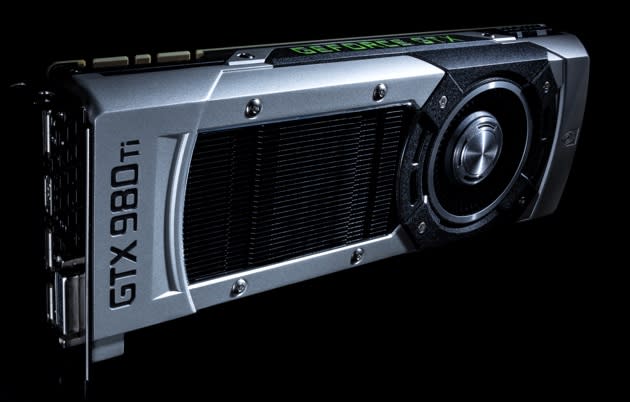 Who needs a $650 video card? Pretty much anyone who wants to play games in 4K at decent frame rates. That's the basic pitch for NVIDIA's new $650 GTX 980 Ti, its latest high-end video card, which, naturally, packs in even more power than last year's GTX 980. The new card sports 2,816 parallel processing CUDA cores and 176 texture units, around 38 percent more than the GTX 980, as well as two additional gigabytes of RAM giving it 6GB. It's also based on NVIDIA's new GM200 GPU, which is at the heart of the company's absurdly expensive $1,000 Titan X card. Basically, that means in the instances where its former heavyweight card slows down in 4K -- for example, by running Grand Theft Auto V -- the 980 Ti should shine. NVIDIA says the new card gets around 60 FPS in GTA V, while many benchmarks of that game with the 980 see between 35 and 45 FPS. The 980 Ti is also good news for anyone waiting for a good deal on the 980, since NVIDIA is also dropping the retail price of that card from $550 to $500.

NVIDIA claims its memory bandwidth is also 50 percent faster than its predecessor, which makes a big difference when throwing huge textures around. Of course, the Titan X is an even faster option than the 980 Ti, but its high price makes it far out of reach for most, even hardcore gamers.

Together with the $200 GTX 960 and the $330 GTX 970, NVIDIA now has powerful new cards for gamers with a wide variety of budgets. It's just a shame that we didn't see a slight price drop for the 970, which so far appears to be the best overall value for high-quality 1080p gaming.

In this article: computex2015, gpu, graphics card, GTX980Ti, nvidia
All products recommended by Engadget are selected by our editorial team, independent of our parent company. Some of our stories include affiliate links. If you buy something through one of these links, we may earn an affiliate commission.