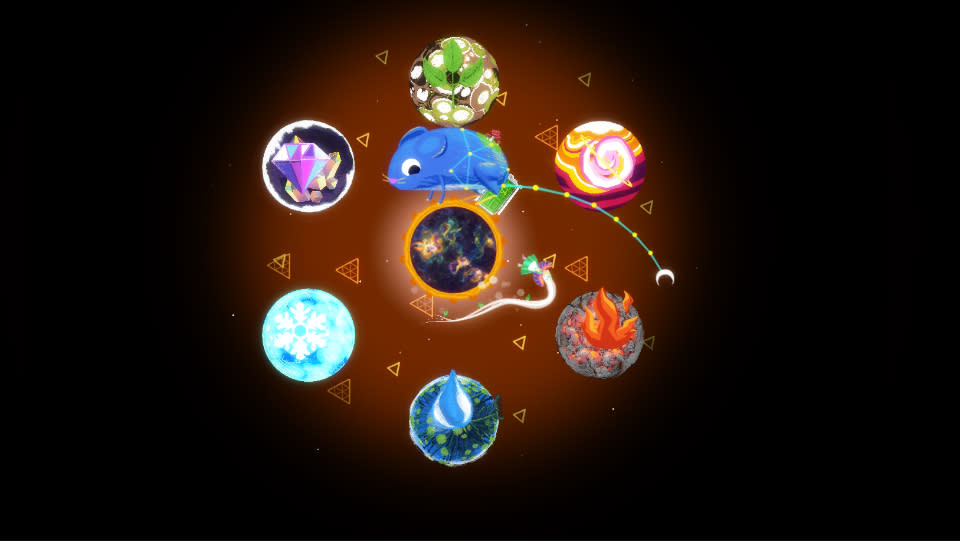 Gravity Ghost is currently in development for PlayStation 4, but it's already a success. It launched on Steam in January, offering physics-based platforming tucked inside of soothing, spiraling gameplay and wrapped in a touching story. Ivy Games founder Erin Robinson Swink of course hoped that people would enjoy Gravity Ghost, but reception to the game still surprises her five months after its release. She's mostly touched by the emotional reaction many players describe on the game's Steam forums. Gravity Ghost helps people deal with loss in a visceral way.

"It's not a forum where I usually see people sharing personal details from their lives, but there are multiple posts like this," Robinson Swink says. "One reviewer said the game changed how he felt about his reaction to losing his grandfather.... Another ended their review with this: 'My mom died last year, and in some weird way, this helped me deal with that? I can't explain it, but it... well, did.' My jaw just dropped when I read those."

It's more than loss, too: Gravity Ghost has found its way onto a list of recommended video games for self-care and one of Robinson Swink's acquaintances said she played at least 20 hours of the game after her home was severely damaged. "It surprised me because that's far longer than it takes to beat the game," Robinson Swink says. "She must have started over a few times. We're so early in the life of the game, it's hard to know what its legacy will be. But if it continues to help people bring down the level of stress in their life, I will consider that a great success."

Gravity Ghost stars Iona, a celestial spirit searching the stars for her lost best friend, a similarly ghost-y fox. Iona soars through a splintered galaxy, flinging herself around the gravity fields of planets to collect survivors and fragments of broken worlds. In Gravity Ghost, you can't die -- you only fly.

Soon, Gravity Ghost will be able to entertain and help people on PS4. There's no official release date yet, but the PS4 version will feature exclusive content, including a new constellation with new challenge levels, three new original tracks from composer Ben Prunty and a new, unlockable character to play. Until now, Gravity Ghost has been strictly a PC game, from conception to sale. Robinson Swink says she developed it entirely on her laptop, where everything is small and up-close.

She's not just an avatar, she's a character in this world.

"For me it's a very different experience to be playing the game on a TV," she says. "It feels larger and makes outer space feel more encompassing. I deliberately made Iona very small compared to the planets, but now I get to see her in high detail even when the camera is far away. It makes her feel a lot more real, somehow. She's not just an avatar, she's a character in this world."

Robinson Swink believes Gravity Ghost should do well on PS4, considering that players already compare it with Journey, a soothing, highly acclaimed, PlayStation-exclusive game. Besides, PC sales have already covered her direct development costs, so from here on out it's smooth sailing -- or soaring.

"I'm pretty stoked to bring it to the PS4, as it's a platform where I think not many people have heard of the game yet," she says. "I think the chill-out gameplay and impressionistic art style will be a really good fit with that audience.... Obviously I'd be thrilled if our sales were really good on the PS4, but I think the port will be worthwhile no matter what."

In this article: calm, GravityGhost, hdpostcross, Indie, IndieGames, IvyGames, Playstation4, ps4, SONY, STEAM
All products recommended by Engadget are selected by our editorial team, independent of our parent company. Some of our stories include affiliate links. If you buy something through one of these links, we may earn an affiliate commission.